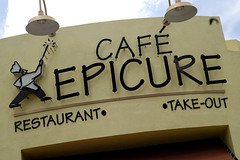 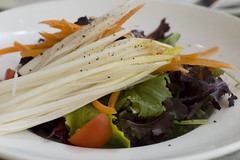 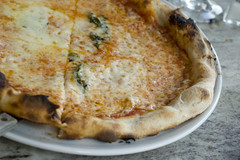 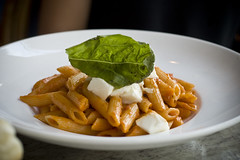 Choosing this restaurant was an out-of-the-blue trick from a drive-by where Paul recognized the Italian brand "Segafredo" being advertised. The place was exceptionally well decorated with beautiful furniture and a large blackboard at one wall listing the day's specials. I also thought somebody was pretty smart because the tables nearest the windows were always filled before the interior tables so from the outside it looked like a popular place to eat. It must have worked because when we left only two tables were empty. I was most impressed with the staff who greeted us promptly and immediately started a conversation asking if we were having a good day even though a storm was on its way. I actually felt like we were more than just a pay check to them.

Paul and I shared a salad and a basket of fresh bread with a cornmealled bottom and a dish of olive paste. That was a hit for me because the olives appeared dark purple. When the basic penne with tomato and mozzarella pasta and Paul's pizza came, we oohhhed and ahhed over the dishes. I couldn't get over how creamy the sauce was. The basil tasted almost as if it had been cut straight out of our garden. And the cubed mozzarella was such a nice touch. When asked how he evaluated the restaurant, Paul answered "I would eat there again tomorrow."

After watching us take pictures, the waiter came over and smiled asking us if we were writing a review. I giggled and Paul said "She writes a vegetarian website. Eatlikearabbit.net." He said "Well, this doesn't look much like rabbit food, but OK." And he proceeded to tell us about the renovation plans. Obviously, they met capacity more often than just when we were there. Paul put the staff's nervous mind at ease when he said their's was one of the top three pizzas on this continent. The guy blushed and said "Thank you".

Hey, are you and Paul doing the travel tour now as food critiques for the "Orlando Fine Living" magazine?

Oh, are you buying us airline tickets? Perhaps you are offering us a job. We just have good taste at reasonable prices. And we're very good about bring our lunches to work, which gives us a greater budget to explore a larger variety of restaurants.