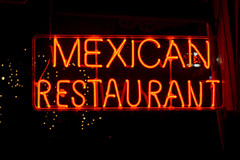 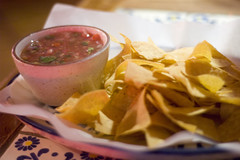 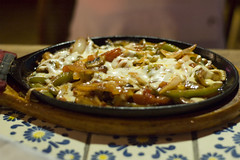 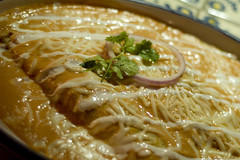 Paul said in the Newlywed Game we played just after our wedding that the bill I would not want him to see would be my salsa bill. It would be my "Casa del Sol" bill if we lived in Bradenton, Florida. The chips and salsa were well worth the trip. Half of the 10 tables in the restaurant were filled, two with large groups. And there were only two servers in the joint. Paul joked that they must be cooking, too. There really wasn't much wait for our food. The waiters worked very hard to give complete attention to each table, and I think they succeeded.

We ordered a side of guacamole to go with the chips and salsa. It was delivered with marinated red onions. I thought they were good as far as marinated onions go. Certainly not overpowering, which is the way I like it. There was a surprise near the bottom of the guacamole dish--a medium-sized avocado triangle. We thought that was just great.

Paul's spinach crepes were beautiful and good. The sauce was very creamy and white cream garnished the top. It was too rich for my taste, but exceptional just the same. I had ordered fajitas specifically because the menu said there was pineapple in it. I thought that was unusual and figured I'd better try it. The fajitas were not disappointing. There were green and red bell peppers, tomatoes, onions, mushrooms. . .but no pineapple. There was a hint at some point of pineapple juice. Oh, well. I did ask them to hold the mushrooms, but they came anyway. The fajitas came with more marinated onions, grated yellow cheese, a green salsa, and a Chipotle salsa. It was quite the set up and took up much of the table. Paul and I agreed it was very good. Still, I think I would likely try something else next time.

Another online review said there was a separate extensive vegetarian menu, but we didn't want to make more work for the waiter. We simply ordered what was vegetarian on the regular menu.