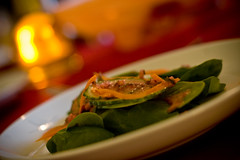 The first time I had a pomegranate salad dressing was in an underground restaurant in Budapest. I was disappointed, but still thought it was a good idea. Last week, we had a few pomegranates leftover from breakfast, and I decided to find a recipe to make a dressing for our parents as we had both sets over for lunch after church. The closest thing I found was a strawberry salad dressing in "Moosewood Restaurant New Classics." I substituted Pomegranates for the Strawberries but kept the rest of the recipe consistent. It was fabulous.

I found this recipe to be surprisingly forgiving. I accidentally added an extra teaspoon of white balsamic vinegar, and maybe twice the salt. I also thought about skipping the basil, but the scent of the vinegar was so strong, I thought I would take my chances. The basil was definitely important to the recipe. Boy, did I learn my lesson!

It is a shame that pomegranates can be so expensive. I would like to experiment with pomegranate juice instead. Nevertheless, this recipe is highly recommended for that show-stopper effect.