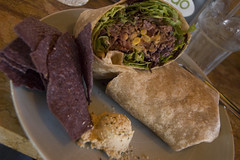 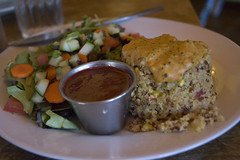 Paul says this is probably the most hippy place in Orlando. But you know what? We keep going there. In fact, it is the most visited restaurant on our list right now. We took my dad a month ago while my mom was out of town, and he loved it. Jokingly, he remarked "If your mother ever gives me any money, I'll bring her back here." He obviously wasn't kidding because we gave him a list of restaurants to choose from to celebrate his birthday and this one won hands down!

I had the quinoa, which has a daily special changing up the variety of tastes. This one was called "vegetable" with corn in it and a broccoli and cheese sauce on top. I did not ask, but I suspect the cheese was vegetarian because they do charge you an extra $1.00 for organic cheddar on dishes instead of vegan cheese. The salad dressing is a vinaigrette with raspberries. I think it is my favorite. Paul had the "Giddy up" in a wrap, which is a "haystack" of lettuce, tomatoes, cheese, chili, blue corn chips, and onions with a creamy dressing. One waiter said it was the most popular dish. There is no question why. My dad had grilled tempeh instead of bacon in a "Fakin' Lettuce and Tomato" and mom had a bowl of chili. As an appetizer, we had the nachos, which is almost becoming a staple with us. The bill was about $53 total, each dish costing about $8.50.

Happy Birthday, Dad! I love you.

Did they put the blue chips in the wrap? Like a Taco Bell's crunchwraps or whatever they're called? Interesting idea.

There are Blue Corn Chips in the wrap or on the bottom of the Giddy-up salad. Also, corn chips are available as a side with Hommus, Sweet Pea Guacamole, or Queso.

I haven't tried the beer as I don't drink, but I appreciate the input of that for my readers who do like beer with their quinoa.