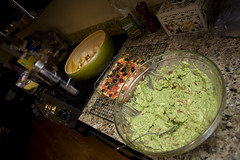 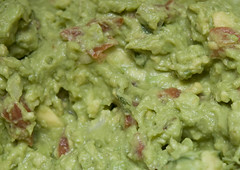 Our good friend, Garrett Nudd of garrettnudd.com has an opportunity to be promoted from guest photographer to guest blogger. Garrett also has his own blog (garrettnudd.net), which is so exciting, it needs no guest writers.

Guacamole is a popular addition to meals and is finding a place on more than just Mexican plates. For example, Seasons 52 served guacamole as a dip between golden beets and broccoli on its Winter Vegetable Plate. However, Garrett's recipe adds a perfect touch of tartness that accompanies Mexican dishes and corn chips perfectly.

Recipe for Guacamole by Garrett Nudd

Another note: When selecting avocados, be sure that they are tender, but not overly soft.

Another note: The amount of each of the ingredients is completely up to your personal tastes (i.e. onion, cilantro, garlic, etc.)

If it tastes bad, you’ve done something way wrong.

Cost: Avocados are expensive, but trust me, it’s sooooo unbelievably worth it! If I knew how to grow my own, I would.

Credit where credit is due: Unfortunately, Joy and I can’t take full credit for this recipe. Actually our friends, Jim and Melissa of Georgetown, Kentucky, and Sticky and Brandy, of Van Wert, Ohio, shared this recipe with us last year and we’ve been enjoying it ever since.

Sounds very delicious, funny thing is that Avocados grow wild in Kenya (people also do grow them for sale) and I could not believe how expensive they are here. I love them though

Are the avocados in Kenya the same as avocados here? My parents are lucky to have friends with avocado trees. We try to take advantage of those when they are in season.