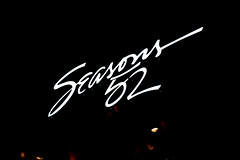 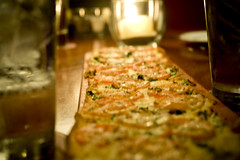 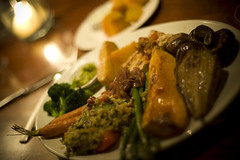 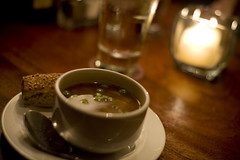 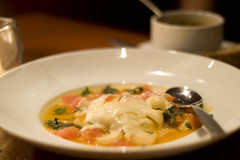 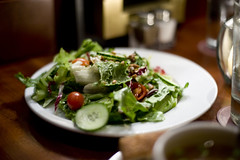 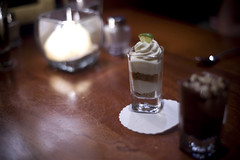 We thought Altamonte Springs was the original Seasons 52 location and had no idea there were more until Paul searched for their website and learned of more although all were in the south. New Jersey will get one in 2009. Seasons 52's name comes from the menu of the restaurant. It changes every week and is based on the foods that are "in season". This ensures variety and the freshest taste possible. Also, the restaurant is labeled healthy in that every item on the menu is at most 475 calories.

We started with a flatbread that is truly flat and carefully covered with cheese, plum tomatoes, and basil. The bread comes sliced into 8 triangles, a perfect appetizer for the four of us. Paul's mom and I had the 100% vegetarian soup with a vegetable broth instead of chicken stock as the base. It is available in a cup (which is what we had) or bowl and is served with a slice of warm whole wheat bread. I had a simple mixed green salad lightly in a very light dressing. The toasted pumpkin seeds garnishing the top raised the bar on elegance. Paul's mom had the goat cheese ravioli, which was divine! The plate is labeled as an appetizer, but it worked very well as an entree in addition to soup.

Paul and his dad ordered the only vegetarian Main Dish Salad on the menu, which turned out to be a large plate of winter vegetables roasted and well-seasoned. The variety on the plate was fantastic and creative in association. Clockwise from the top was a small slab of grilled tofu topped with a bruschetta-style tomato onion mixture. Next came mushrooms and below that was a quarter of a pear. This was a fabulous touch of sugar on the plate. Beside the pear was an equal-sized slice of sweet potato lightly covered in syrup. The baby asparagus was well cooked except perhaps the bottoms should have been cut off beforehand. A sample of tabouleh with cranberries laid on top of a fresh bell pepper half. Beside that were two slim carrots wilted by the fire, but delectable just the same. The broccoli to the left of the carrots appeared to be steamed near perfection. However, I was not sure if the fresh guacamole above it was supposed to be a dip or just a separate vegetable all its own. And lastly, back up near the tofu were large chunks of golden beets, which I feel are much more edible than red beets. Right in the middle of the plate was a spoonful of carmelized onions, which added flavor to any bite from the plate.

Seasons 52 is the original creator of the small cup desserts. For this reason we felt we had to try a couple even though we were quite full. Paul's parents took the key lime pie, and Paul and I shared a chocolate and peanut butter mousse over chocolate cake. If I had to vote, the key lime pie was far superior, chocolate was satisfactory, too.

This was how we celebrated Paul's parents' last night in town, and we were happy to share this new experience with them. Now, they have another restaurant to consider when they visit Atlanta.

Seasons 52 is definitely one of my favorite restaurants. I love the Altamonte Springs one - it is closest to me and definitely the one I frequent the most. I have not tried their vegetarian dishes but they sound amazing. I love their shot glass desserts. My favorite it the pecan pie one, yum!

Anne, do you know if there is a schedule of when the desserts come out? Sometimes it's sad to go expecting a dessert and find that it has changed. I bet they have some fabulous berry ones this time of year!