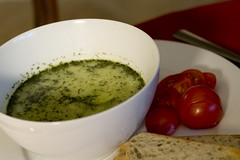 Creamy Zucchini Soup has to be the fastest and easiest soup recipe ever--not to mention cheap! Dinner was on in about 10 minutes, if not less. The recipe from the Vegetarian 5-Ingredient Gourmet was really straight forward. Sour cream or yogurt was what made the soup creamy. I used yogurt instead of sour cream (because that was what we had in the house) and am quite curious to know what the flavor would have been like with the sour cream. I also used dried dill instead of fresh, as that is my preference. I challenged myself with this recipe because it does taste as simple as it sounds. It's is a light soup that does not send every taste bud bouncing crazily. I kept adding salt because I thought it was lacking flavor. But in truth, the soup wasn't lacking flavor. It simply had a lighter, cooler flavor than most soups I make with strong garlic and lots of extra seasonings. So, I started out not being so happy with the soup, but really learned to appreciate it when I was done. I've even already recommended it to some coworkers for it's simplicity in cooking and in flavor. Also, Paul had picked up a loaf of rosemary bread at the grocery store, and dipping the bread in the soup was really fantastic.

Cost to Make the Meal