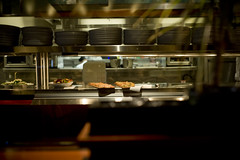 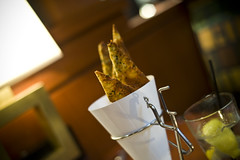 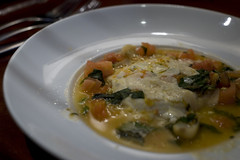 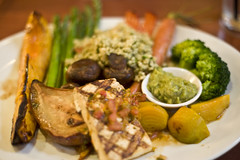 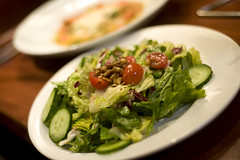 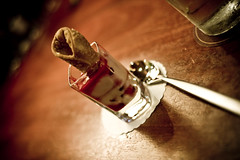 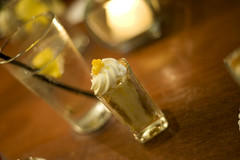 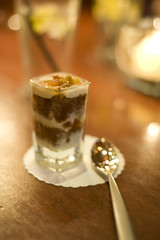 Seasons 52 is seriously one of those places where the food is so well displayed, you can eat vicariously through the pictures. Although the menu basically had not changed since we were there in December, there were a few items that were different. For a detailed account of our experience in December visit my previous Seasons 52 post. The special side of the day was a mixed squash platter, which we elected against because butternut squash already comes on the Winter Vegetable Platter and we already had so much food coming. Also, the desserts varied a bit. The chocolate peanut butter mousse that we had before was not available in February, and the mango cheesecake was not available in December.

This time, we chose the rosemary parmesan flatbread that was served in a cone instead of on a platter. These made great crackers for dipping in the sauce of the goat cheese ravioli or for those who like "pushers" instead of knives, which I don't recommend in a restaurant as nice as this. Speaking of the goat cheese ravioli, Paul said it was so good, the pasta wasn't even necessary except that the cheese is so creamy, the pasta must be around to encase it.

I noticed that this time the Winter Vegetable Plate was rearranged slightly, and my mother pointed out that the sauce to go on top of the tofu had chilis, which I had missed before. Also, this trip around I paid more attention to my salad and thought it necessary to point out that the "mixed greens" is a fairly loose term. There were only two kinds of lettuce in my salad, romaine and radicchio. I still though the salad was wonderful, I just wanted to point out that there isn't a variety of mixed greens that perhaps other restaurants have.

When I made the reservation, the receptionist asked if we were celebrating a special occasion. I said, "Yes, my birthday." Somehow our waiter found out about this and my dessert was "on him". I thought this was a really sweet thing for the restaurant to do. Instead of a big cake with lots of singing, it was a way to celebrate without forcing everyone to down a cake and to attract the attention of the patrons to the upscale restaurant. Our waiter was kind and talkative. We really enjoyed his service, and to our surprise, he gave us his card when we left. I highly recommend STEPHEN THAMM as a server should you dine at the Seasons 52 in Altamonte Springs, Florida.