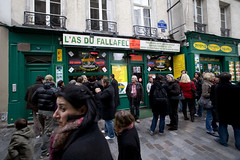 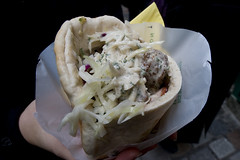 At the corner of Rue Vieille du Temple and Rue des Rosiers is a restaurant with attached street stand painted in red that boasts "Best Falafel in the World." A block down the road at 34, Rue Rosiers, 75004 Paris, is another restaurant with a street stand painted in green and another message saying "Best Falafel in the World." Read a few reviews in English and in French for each restaurant and you'll see.

I had read reviews on three different falafel restaurants (L'As du Falafel, Chez Hanna, and Maoz, a chain) and got too excited by my surroundings to separate the thoughts in my head. We sat down inside Chez Hanna, the red restaurant, but the menu wasn't what I had imagined. We made our only immediate exit out of a restaurant in Paris and walked down the road to another eat-in or take-away falafel stand with green molding. This was L'As du Falafel, the restaurant I had originally scheduled to visit. Although Chez Hanna claims to be the best falafel in the world, L'As du Falafel is recommended by more people in print and on line. Interestingly, the falafel stand across the street had no line compared to L'as du Falafel, which generated a great crowd and required an employee to be a cheerleader to those sitting on the fence and to control the line of people who had decided and needed to place their order. The falafel came as a sandwich in a great cucumber yogurt sauce that was also the sauce on some coleslaw with tomatoes, cabbage, and chopped grilled and chilled eggplant. All the dressing and stuffing was wrapped in a pita pocket. L'As du Falafel offered free samples of its falafel. The sample was convincing. I do believe the falafel we had was the absolute best ever. The falafel was tiny in shape--more bite sized compared to many that are larger like a hush puppy. My only frown was that Chez Hanna did have hommus and other sides to add to the falafel, which I did not see on the L'as du Falafel menu. However, the sandwich was a perfect size for us to share as we walked to our next site-seeing destination. The price was an even 5 euros.

Go here for a story about our whole day in Paris.