I would like to thank my father for his talented photography, and I congratulate him on his first appearance as a guest photographer for ELAR.

Bright and early Saturday morning, Paul and I met my parents for a quick breakfast of yogurt and a roll and took an hour to go see the Notre Dame Cathedral. We arrived in time to hear the bells toll. Then we listened to an MP3 of Rick Steve's lecture about the cathedral, made a loop inside, and walked around the exterior. At 8:30 in the morning, we were happy to be present with other individuals heading into mass instead of being bombarded by itinerant salesman illegally pedaling Eiffel Tower key chains or by Romanian beggars pretending to collect money for children when it really goes to a group of organized leaders. By the time we exited the cathedral, there were many more tourists, beggars, and salesman crowding the front.

Point Zero is a small dot in front of the church from which all distances from France are measured. I was sad to see that it was simply a small tile with no plaque of notification or acknowledgment of its importance to history and geography.

Fed by a Church

A few of our groupies met at 10:30 to walk to church to hear Brina speak about her humanitarian efforts in French-speaking African countries. Her stories were very moving, and I was glad to hear more about her work as I can't read her French website, ADRA France.

The church very generously wanted to feed us a snack after the service. Since the French eat smaller portions, there were no large platters of food like we see at American potlucks, but there were many smaller dishes with delicious items. They served a pizza/quiche combination with so much cheese that the turkey was almost invisible. My father didn't realize it and ate a slice. He thought it was very good. Surprisingly, we had guacamole at the church, too. This time, it was more traditionally seasoned and was served with crunchy tortilla chips. Guacamole must be quite popular because it was on a lot of menus. But this was the last time we would eat some in France. We also had some cool breadsticks that I fell in love with and decided immediately to purchase before I left the country.

Many residents in France are from Africa. Morrocan food is very popular, so they say. We never had the opportunity to eat at a Morocan restaurant, but at the church we had couscous (a Moroccan pasta that I love to use in tabouleh) mixed with tomatoes and peppers like a Mexican rice. I had two servings. And it's on the list of dishes I want to try to make at home.

We had another snack after church, which will be reviewed later. Then when Brina went back to the hotel for a rest, Terry and Cathy stayed with us as we headed to Montmartre. We hopped on the metro for speed in comparison to walking or taking the bus and walked up the streets and then the steps to the great white church, the Sacre Coeur. 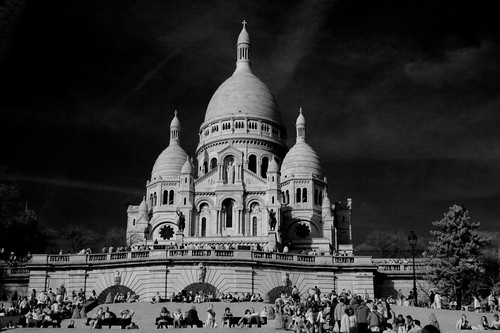 At every landing in front of the steps there was a trio of men with microphones and guitars singing for donations to their cause--their wallets. Also as we walked, African men tried to braid bracelets onto our wrists. As soon as the bracelet is tied, the wearer becomes responsible to pay the bill. We had to be pretty stern in our refusals. The steps were packed with locals and visitors appreciating the sunshine and warmer weather. It was hard to stand still anywhere because someone was always lighting a cigarette. Inside the church with its bright white interior and red stained glass windows, it felt like a cattle heard. There were so many people moving through the church, there was no space to stop to admire or to take pictures.

After a few minutes, we were funneled back outside where we found seats in front of the iron gate around the Sacre Coeur and watched as the rest of our collective group hiked up the steps to see the church for themselves. Each time someone from the group greeted us, we said we had already been through the church and that it happened quickly because tourists went the same speed as the tourists around them. We enjoyed the weather and the views just like everyone else and got to chat with some people from the group that we had not yet seen on the trip.

Because we already had a collection of metro tickets (and much of the group was fresh to Paris), when the sun started to set, the six of us took off for the Eiffel Tower to take pictures before it was too late. As the sun went down, the lights on the tower came on, and we heard the awe in the voices of the people that were on the tower. 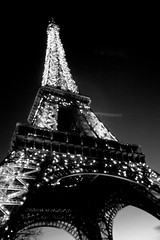 Since the Millennium, Paris has found great success in the Eiffel Tower twinkling for about ten minutes every hour. The view is spectacular from the ground. I hope to add video of that experience soon.

Watching the incredible sunset around the Eiffel Tower and then watching it create light of its own was followed by a late supper and a boat ride on the River Seine. The wind was occasionally brisk, but the ride was incredible and the views were breathtaking as the city, bridges, and other tour boats around us were all decorated in light. We watched teenagers having little parties on the banks of the river and enjoyed waving at the "people watchers" along the way.

A Day with the Metro Pickpockets

We were warned by signs at the Eiffel Tower and in lines at bathrooms to watch your pockets in case stray hands tried to pickpocket. However, we had been well warned about the pickpocket possibilities on Metros long ago. Twice on this day, we were able to experience the fear. The first time the six of us crowded onto the metro, a girl ran up into the middle of our group. I thought she was coming to get ready for the next stop. Talk about naive! She had actually "run into" Terry and was reaching into his pocket, but he noticed and moved quickly. This is a lesson to anyone trying to give others the benefit of the doubt. It's not a pretty world on the metro. Always be on guard and have your hands in your pockets. Even if they get away with Chapstick, it's a sign of what can come.

The second time we got off the metro, Paul took the steps two-by-two to get out from the underground, but I led the easier-on-the-feet method of taking the escalator. However, about two steps in, the escalator came to a quick halt, and I grabbed quickly onto the railing getting grease all over my hands. What had happened was that Terry had attracted some pickpockets who work together and while one gets close behind you on the escalator, the other hits the stop button at the bottom of the escalator causing a jolt, which makes the pick-pocket "accidentally" run into you to give him opportunity to get his hand in your pocket. Terry felt the hand and yelled "Watch out, there's pickpockets behind you!" Which sent the delinquents running. This was a great learning experience for us. It seems Terry had a lens cap or something similar in his pocket which was very attractive. It would have been worth nothing to anybody else, but it was a waste of time and energy for us. Let it be a lesson to us all to make sure that we are careful what things look like when they are hanging on our person.

With all that excitement, we had no issues falling asleep quickly that night.