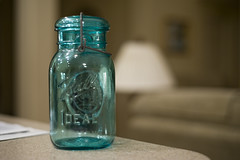 Last week, I posted a menu for what I planned to fix for dinners for the week. It went much better than the first menu I planned went. Strange, this is the end of March and I've only fulfilled this New Year's Resolution twice? How sad.

Sunday, I made Mexican Couscous for us as well as for my dad who came over to entertain himself as my mother is out of town. Only, I didn't serve it with cornbread because I only had two slices leftover and didn't want to make a whole other batch. We had nachos instead (horrible trade off, I know), and Paul took the cornbread for lunch.

Also on Sunday, I premade the dough for the pizza which was a very quick meal for three on Monday night. Unfortunately, I was looking for it to turn rather brown, but it didn't and got awfully hard. My men didn't complain, and we ate it anyway.

Tuesday was burritos for three and the sorbet I was dying to try, but Wednesday we were back to just two diners and had baked potatoes.

Thursday was the challenge because Paul had to go straight from work to a designer's meeting leaving me to cook for myself. I passed on the eggs and made myself a delicious panini.

I will have a plan for the next few days shortly.