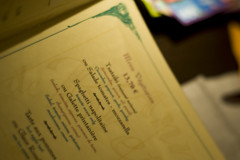 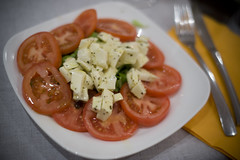 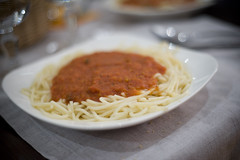 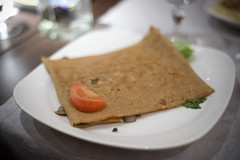 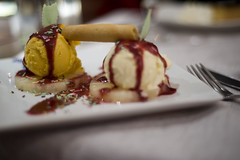 There were only two restaurants in Amboise recommended to us by the staff at our hotel. Unfortunately, one of them didn't have any vegetarian options on the menu. A number of us chose this restaurant. Creperie Anne had something that really stood out. It had a vegetarian menu. Many French restaurants have a three-course menu for a set price--in this case 13,70 euros. This was the first meat-serving restaurant we visited that had a set vegetarian menu. I think this is a great example of what's to come. Not long ago, a vegetarian had great trouble eating in France. Now, the French are seeing that a vegetarian option on the menu is key because vegetarianism is certainly gaining popularity in America. And France needs tourists (just like everyone else right now.)

We started with a Caprese salad as (if I remember correctly) the restaurant was out of the green salad option. The salad was yummy and was served with bread, which could have almost made a meal of itself. Next, came spaghetti for me and a galette for Paul. The spaghetti tasted straight out of a bottle and the galette seemed cold and tasteless with lots of mushroom and a few sprigs of lettuce under its folded layers. This galette was also greasy and fell apart. Maybe that's just the style of galettes. The language barrier was a problem because my tart dessert (because I hadn't yet had one in France!) ended up being the fruit ice cream. Paul had already ordered the ice cream so we couldn't trade. The ice cream was well presented, but a bit much I think.

Let's just say, it wasn't the worst meal of the trip, but it wasn't worth missing the bus for, either. That night the bus had to go back to the hotel 2 miles away early because drivers are only allowed a certain number of working hours a day. We had to walk back, which I don't complain about. But I bet we would have had a better meal if we had just gone and picked up some items at the grocery store.