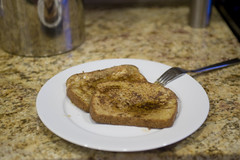 I've been reading a new cooking book called Eat, Drink, and Weigh Less. And no, I'm not on a diet. One of the authors happens to be Mollie Katzen, the author of the Moosewood Cookbooks that I adore, and the woman who started the Moosewood Restaurant in New York. I received the diet book for my birthday for two reason: 1)There are a number of new recipes in the back of the book and 2) my office (a cardiology clinic) started a Health and Wellness program at the beginning of the year and Paul thought the book would be helpful in the way I deal with my patients. I can't believe some of the statistics I read. Indeed, it will help a lot of people! Just for the record, when I opened the present, Paul had stuck a Post-it note over the "Weigh Less" part of the title and had written "Be Happy."

There are a number of recipes in the book I am anxious to try, but since I had time this morning, I gave the French Toast recipe a shot. After Paris, a breakfast of French toast seems rather boring, but I'm hanging on to that vacation any way I can for as long as possible! I have never added milk to my batter for the bread until this time. Also, I had to add a teaspoon of brown sugar instead of the pinch of salt that the recipe called for. And, I added plenty more cinnamon than the recipe called for. I have read that cinnamon aids in digestion, but I read nothing about it contributing to weight gain. Also, I didn't grease the pan with Pam or butter as I have not known my non-stick pans to be a problem before and like to cut back on extra cholesterol when I can. So in truth, I hardly followed the recipe at all except for adding milk. I do really like French Toast with a multi grain, nut, or other crunchy bread. The nutty flavor stands out and takes French toast a step higher in the taste buds.

If you are looking for a diet plan, this book makes allowances for and assists with creating meals for vegetarians or semi-vegetarians in addition to carnivores. It is easily adaptable and has a Protein, Fat, Calorie, and Fiber count for every recipe, which saves a dieter a lot of work.