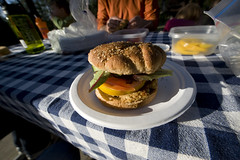 We loved these vegeburgers. I could see putting Grillers out of business with these. But beyond that, these make something pretty rare for people on a gluten-free diet. Most vegetarian meats have gluten or wheat products in them, which makes it hard to fill that empty spot in your stomach wishing for a vegetarian hamburger. Lisa has come through with what I think is a family recipe. And Paul hopes I make it a family recipe as well. By the way, the bun in the photograph is a whole wheat and not a gluten-free item.

Here's the veggie burger recipe as best as I can replicate it. I've never made them exactly the same twice.

TSP=Textured Soy Protein can be interchangeable with TVP=textured vegetable protein. You'll sometimes see them in ingredient lists. The TVP is sometimes a red flag for gluten because they aren't committing to what type of vegetable protein it contains. So that's something I watch for. Just search on Google or on Amazon.com. Check to make sure the TSP or TVP used is gluten-free. Unless stated on the package, TVP (textured vegetable protein) is a red-flag for possibly containing gluten since the manufacturer is not stating what type of vegetable is used to make the product.

My mom buys the TSP in bulk at the Loma Linda [California] Market, so I don't know where to send you to get it. Bob's Red Mill has some, but it isn't already seasoned, so you would need more seasoning if you were to use this kind. You could also use just the canned veggie meat if you're not trying to be gluten-free, and just make the rest the same (you might reduce the seasoning a bit if using the canned variety). Here is a chicken-flavored TVP on Amazon.com, but the packaging doesn't give you any idea whe the product looked like.

Boil water and combine with TSP to reconstitute it. Fluff with a fork. In a medium sized bowl, combine reconstituted TSP with onion and remaining ingredients. Depending on the consistency of the mixture, use 2 or 3 eggs to achieve a consistency that will hold together when formed into balls (or use 2 egg whites to equal 1 egg). If mixture is too dry, add another egg. If mixture is too wet, add more bread or cracker crumbs (can
use one or the other, don't have to use both). When desired consistency is achieved, form into balls and press down into an oiled skillet. Cook for several minutes on each side until done. When the first batch is done, taste a patty to determine if seasoning if
just right. Adjust as needed. Makes about 18 3-in. patties.

These sound really good! Gonna have to try them out!