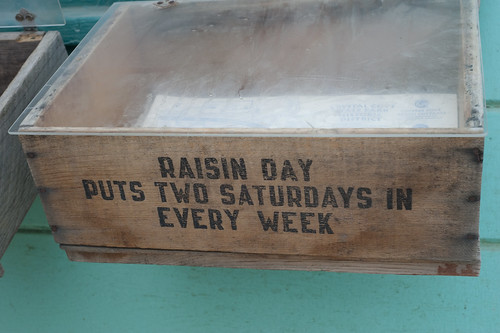 While walking around the beach called Crystal Cove, a retreat that has been around for years where Paul's folks both used to visit as kids and still stands nearly unchanged from its past, we passed a box for maps, and on the sides were stenciled messages. This Raisin Day one was on the front. The back of the box says "Every Wednesday is Raisin Day." For Paul, who can live on raisins and peanut butter, it was a fun joke. For my dad who hates raisins, it was a funnier joke. When I emailed him the picture, he politely requested that we not bring him back any raisins from Trader Joe's. But, Paul did bring back raisins from Trader Joe's, and my plan is to sneak them around to him all day long. I'll try to let you know how it goes.

We don't know anything about the Bakers company, but we certainly know all about Sun-Maid Raisins. Raisins are a great source of iron, and you would be surprised how much protein they pack. Perhaps you'll be inspired to start a Raisin Day of your own.