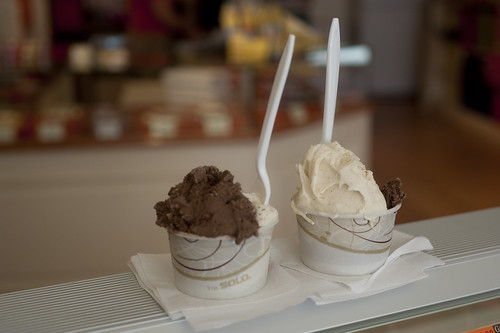 While walking down Las Olas Blvd. in Ft. Lauderdale looking for a reasonable place to partake of lunch, we happened on a flag outside a chocolate shop advertising Gelato. We walked in and reviewed the case of about 20 flavors. The proprietor had an accent and an inviting smile. He was helping someone else when we entered, which gave me time to take a look at the chocolate selection. Even on sale, they were out of my price range, but the packaging was well done and the flavors sounded yummy.

We were offered a taste of gelato, and we decided rather quickly. I had the chocolate raspberry truffle, which was a great dark chocolate with just a hint of the fruit more in the aftertaste, and a quality vanilla to balance out the richness. Paul had chocolate and stracciatella (chocolate chip). The only disappointment was that it was the middle of a hot summer day and since there were no places to sit in air conditioning, we continued our walk outside, which made our gelato melt faster than we have been taught to enjoy it. Truthfully, we thought the store made a mistake in that we were served spoons to eat with instead of the little colorful shovels we normally see internationally, but due to the heat, the larger spoon was more helpful.