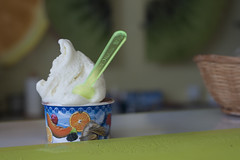 Miami is a tough place to survive in. You have to pay (often a lot) for parking. And generally in one way or another, you have to pay to use a restroom. Such situations put a pregnant woman in a predicament. For the latter reason, when we came across Portofino Gelato with a sign on the door that facilities were for patrons only, I wasn't sorry that Paul was happy to have a snack of gelato. I took snacked, too, but only after I used the facilities.

The girl at the counter was most unhelpful. Paul asked about the peanut butter gelato--was cream- or water-based. She said "It's peanut butter." There was a light blue gellato called "Sky Cream." I asked her what it was. She said "It's vanilla." I said "It's vanilla with blue food dye?" Nod. OK, then, next option, please. Paul settled on the banana that was exceptionally good and chocolate. In an effort to be different, I chose the peanut butter to go with my chocolate. Generally, two flavors of gelato are delicious, but putting two delicious flavors together makes the experience almost magical. Sadly, mixing the chocolate and the peanut butter just made the peanut butter edible. Serves me right for just making a selection to get out of there instead of trying it first. Moreover, serves me right for thinking Paul and I had to be different.

For those interested in the lighter side, this gelato shop had the largest selection of "light" gelato I've ever seen. Mind you, if you get the water-based fruit flavors, it's pretty light as it is, and you don't have the questionable additives like what makes the "light" gelato sweet. But if it's a necessity, this is certainly a possibility.