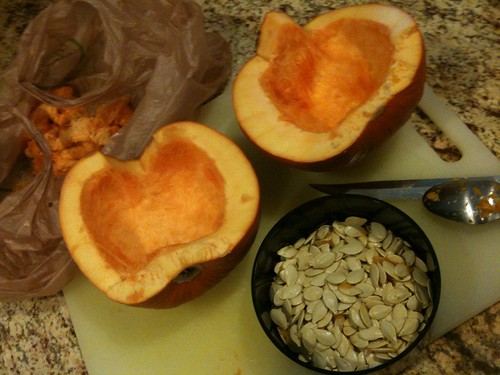 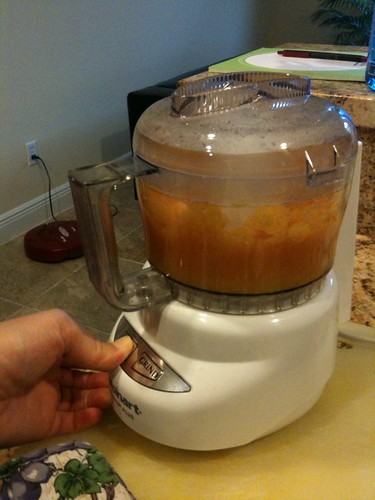 Last year we dined with some friends of my parents who told me I would never go back to canned pumpkin puree after using a pie pumpkin. This year I decided to see if I had the taste buds to agree with such a statement.

I was grateful to come across a guest post on a money-saving blog I frequent to tell me how to get started on the process. Pureeing pumpkins really isn't that hard, but it can be time-consuming. I was trying to salvage the seeds. Separating them from the slimy strings was the hardest part. My stem already came cut off, but I did have to pierce the skin with a knife and microwave the entire pumpkin 60 seconds to soften it enough to cut--even though I have a really sharp knife. Another recommendation I have is to put the halves down in the water instead of up because that is how I was taught to cook squashes, too. The two halves fit perfectly in a 9x13 pan. However, I did not need to microwave them for 30 minutes. I have a very strong, energy-saving microwave that was done in about 10-12 minutes. I highly recommend cooling the pumpkins completely before handling them because they burn fingers quite easily. I had to do three to four rounds in my mini-Cuisinart, but it wasn't a stressful process to puree the batch.

Generally I don't get great deals on produce because we live in the big city of Orlando, but I was thrilled to know that in comparison to the guest post I got a good deal on the pie pumpkin, especially since I wasn't sure what was going to come of the finished product. At a local farmer's market, I got a 3.07 lb. pie pumpkin for $2.73. I found there really wasn't much water in the final puree to drain out. I don't know what that means. But, I ended with a full 3 1/4 cup of puree to make my pumpkin pie and some pumpkin chocolate chip muffins, too. I'll tell you how those turned out later, but right now Paul and I have to go help some friends move. As a hint to their popularity, I'll be packing the muffins for snacks.