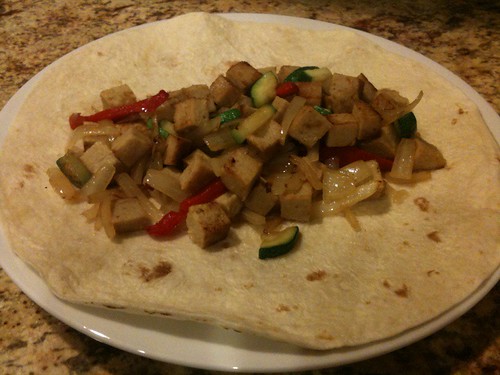 Sometimes, the best laid plans aren't enough. Remember how my menu plan for the week included pre-cut vegetarian turkey and zucchini to make a second batch of soup? Well, tonight, for some reason, soup wasn't a good idea. It is a bit warmer in Florida, and I grazed on goodies all day at the office. So, it didn't take me long after getting in my car and starting the drive home to evaluate what was in the fridge and to change my mind. What I loved about the fajita idea was that everything had been prepared already. So, it was a cinch to cook, and I had two huge fajitas on the table within 15 minutes. Moreover, my only dishes were two plates, the sauteing skillet and spatula, the cutting board and knife for the onion (they were only in rings), and two knives and forks to eat with. Thanks to an empty dishwasher, clean-up was even faster than cooking!

On Sunday night, when we made the first batch of soup for my parents and grandmother, I cubed the entire batch of turkey and all the zucchini. Meanwhile, Paul shredded the 2 lb. block of cheese. We almost always have onion pre-peeled and sometimes sliced or diced. Tonight, I pulled the onions our of the fridge and some frozen bell pepper sticks out of the freezer. Let this be a lesson for super-busy multi-tasking individuals. When you start something (like dicing up veggies), go ahead and finish it. It will pay off in the long run.

The picture was taken before the cheese was added so you can see the great color of the veggies and "meat". I think looks can be deceiving because the tortilla was very full and rolled up large--bigger than it looks in the photo. I wasn't being stingy. Certainly, two fajitas were enough to feed us both along with the fruit we had for dessert. Paul had a banana and pineapple for dessert. I just had the pineapple.

Note: Proportions of veggies and veggie-meat were what I had on hand. The beauty of such a recipe is that you can always add or take away or exchange. There is no wrong as long as you like what you are putting in the dish!

Place a medium to large skillet on medium-high heat. Pour in oil and add onions. Stir until onions soften. Add bell pepper, zucchini, and turkey. Stir to coat with oil. Let sit occasionally to brown sides of veggies and stir again. Veggie-meats do not have a minimum cook time. You only need the food to be cooked through (and the veggies tender, of course). Place tortillas on microwaveable plate. Spread vegetables evenly in center of wrap. Sprinkle with cheese and roll. Microwave 30 seconds to melt cheese OR while the veggies are cooking, place the tortillas on top of the skillet so they catch the heat from the cooking. Turn often to make sure all sides are warmed. Then, you don't have to microwave the finished product.