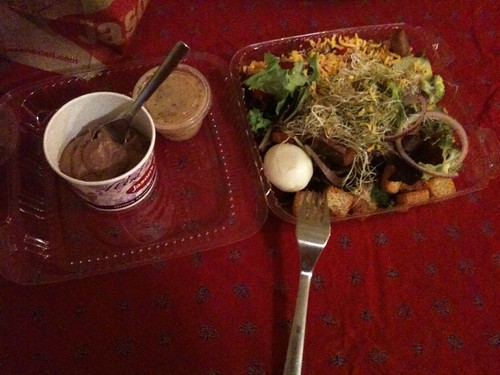 I haven't blabbed about it yet, but the story would make much more sense if I did. Here goes: I am not planning a dining schedule this week for a couple of reasons. Firstly, Paul is gone to a convention, and since he can be so much of an inspiration to me, I'm happy dining on PB&J and fresh seasonal fruit until his return. Secondly, I had a small trip to the ER (As if any emergency trip is small!) on Friday morning and am currently in a position where I am not allowed to be off my feet long enough to make anything other than PB&J, which means I have to sit to cut my orange, too. I tried to move some furniture in the middle of the night (Why would a pregnant woman be up in the middle of the night?) and the furniture won. I broke my toe at the joint where it connects to the foot and have been tied up in a very unattractive, winter boot to hopefully keep the bones in place until they heal back together. Praise God it was a clean break and--unless I don't take care of it properly--will not need further treatment.

So, after a medium-sized walking day at work, I purchased a salad with the last of my Jason's Deli Giftcard in order to eliminate any additional time on my feet. This was only the second salad that I have purchased from Jason's and like the other girl at the bar said, it really does seem like a good deal.

For $6.99, you can have a to-go plate of salad with a large variety of toppings (some organic), additional egg or pasta salads (not sure if they were vegetarian), and a pudding and muffins for dessert. There is quite a large selection, and you get three containers to stuff as full as you choose. I am very pleased with the quality of the bar--no wilting or brown lettuce, eggs always cooked to perfection. Although, two of my cherry tomatoes didn't taste very good, but that's a chance you often take with toms. My salad had mixed greens, cheese, red onions, cherry tomatoes, egg, sunflower seeds, broccoli, cucumber, and sprouts. I would have liked to try the olives, but I couldn't reach them and didn't have the energy to walk around the bar to the other side. I chose Leo's Italian dressing. I'm pretty sure it has a grated cheese in it, which would keep it from being lactose-free or vegan. It also has a lot of black pepper. I thought it was good. For dessert, I had some chocolate pudding. I don't know how to rate it because I don't get it very often. It was creamy, and I like the bittersweet chocolate chips mixed in.

Back to the plan for the rest of the week. . .I'm on standby at the church recording tomorrow; so, I'll get fed there. And, Wednesday I have to stay out a tad after work to acquire a few last-minute gifts. (Yes, for me, a week before Christmas is considered "last-minute".) I'll acquire healthy fast-food while I'm at the mall. Thursday night, Paul will be back, and I plan to let him be in control of the kitchen until I am comfortable doing so.

Meanwhile, I will do research for our upcoming trip to New York City and catch up on a few other posts that I am quite behind on. On second thought, as if the third trimester of pregnancy weren't tiring enough, I am quite worn out from dragging my leg all over the place. Perhaps, I might should just turn in early.