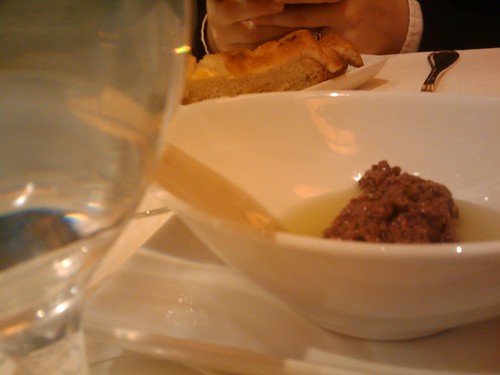 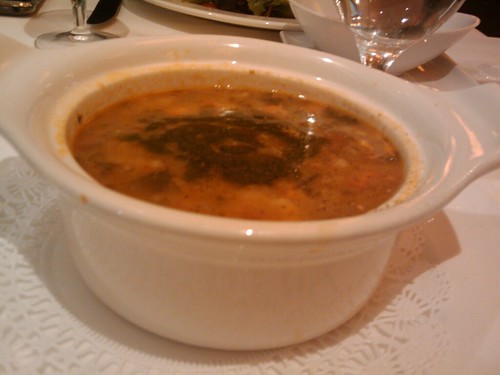 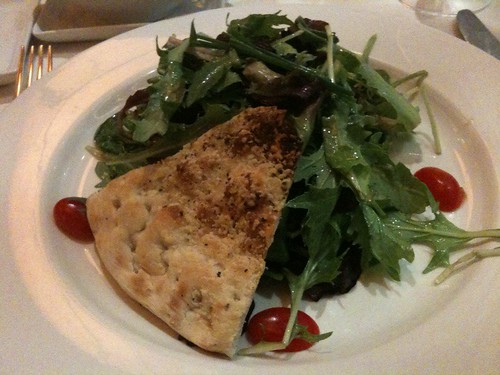 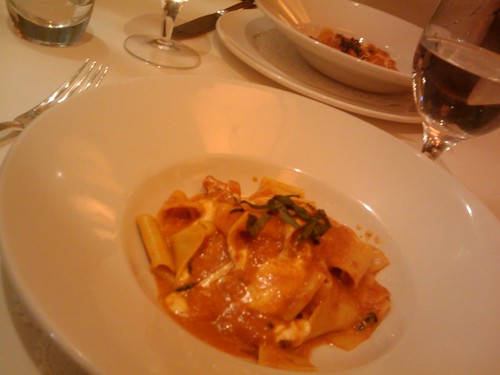 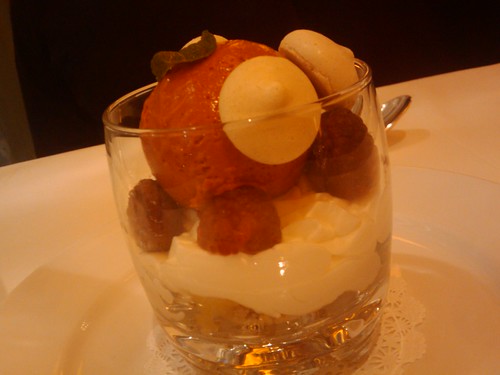 The concierge at our hotel needed to direct us to a reasonably fast dinner location. Paul said Italian pizza sounded good, and she made a reservation for us at Salute! on Madison Ave. and then directed us on the best way to get a cab to Carnegie Hall for a beautiful, but long performance of Handel's Messiah. (In case you never knew, the Hallelujah Chorus is not the end of the program, only of Part 2.)

Salute was an amazing restaurant with a bar in the front and lots of tables in the back. The monochromatic color scheme made the room very inviting, and we loved our seats looking out the window.

A kind lady met us at the door and waited patiently while I removed both coats and packaged my gloves and hat so as not to lose them. Then, she led us to a table, that I'm sorry to say was very tipped. However, we were happy to have a seat and the leaning table was never a problem.

Our waitress arrived with menus and took our order for drinks. New York water tastes very good. However, I have learned to order lemon with my water, especially when I'm dehydrated. The lemon never came.

I was somewhat disappointed with the lack of vegetarian options on the menu. Paul, and I also noticed a lady at an adjoining table, misread the menu and thought the tortelloni (meat-filled) was tortellini (cheese-filled). That would not have been a nice surprise. The minestrone was vegetarian, and I believe just the one salad was. We also decided to share one of the two vegetarian pastas available. The one we chose was a basic pink sauce over egg noodles topped with mozzarella and basil.

First, a slice of thick bread was delivered with an amazing dip of black olives, capers, garlic, oil, and lemon. The bread was not warm and fresh, but it wasn't tough either. We loved the olive spread. My salad came with organic greens, a bit of a surprise. The tomatoes were exceptionally good given the season, and the dressing was deliciously light balsamic that was not offensive to the taste buds in the slightest. Although the salad was very good, I really, realy liked the large clippings of chives garnishing the salad.

I believe the soup also had organic barley. Again, although I am not obsessed with choosing organic ingredients, I am intrigued when at a restaurant occasional ingredients are. Most of the time, it's all or none. Anyway, it was the first minestrone I had had without kidney beans in it. Also, I think it generally has pasta instead of barley. No complaints, however, the flavor was divine and the barley was great whole grains.

We ordered the pasta to be shared, and I was pleased that it arrived already divided. Then, the absolute coolest cheese grating cone arrived with a wooden handle on top and a large metal circular grater on the bottom. I almost asked if I could buy one to take home. It was a beautiful piece of useful artwork. I rarely have the opportunity to eat egg noodles and couldn't tell if they were al dente. Paul said they were; and I appreciate when he has more culinary experience than I. I have to say, although it was very good and Paul loved the pasta, it was my least favorite item on the table. That generally means everything else on the table was exceptional.

Just for kicks, we ordered a dessert. Paul let me choose, and I narrowed it down to two, allowing him to make the final call. We agreed on a layered dessert with crumbled cookies on the bottom, crushed pineapple topped with whipped cream, and a scoop of strawberry gelato surounded by fresh raspberries, and garnished with whole cookies and mint leaves. It was very, very good. I could have easily eaten one on my own. I loved the mixture of fruits. (Did I happen to mention, I've craved a lot of pineapple and strawberries during this pregnancy?) It is definitely a dessert not to pass up.

Some critiquing: originally, we were disappointed because we had asked the concierge at the hotel for a pizza joint. Come to find out, you have to ask for the pizza menu at Salute. We were very happy with our meal and were glad the concierge recommended Salute. Fortunately, we knew their would be other opportunities for pizza in New York. It's just a good idea to share the fact that you can have pizza, you just have a different menu to order from, and it won't be offered to you; you have to ask for it.

Also, waiting tables seems to be a team activity. I will say that the lead waitress who took our order and forgot the lemon (which I never brought up) was rather curt, generally speaking. However, the other two-three servers we came in contact with were exceptionally nice. I noticed they were also very kind to the large table next to us. If I were a regular, I would likely ask for a different table and server.

I don't know for sure what the cost of the ticket was. I suspect it was around $60. Paul made it a point to take all the receipts before I could see them because it was "Spoil Amanda Weekend" and I was too worried about our budget. Hey, I'm a planner! However, the more I thought about it, the more I was happy to blow our budget on such a good meal.