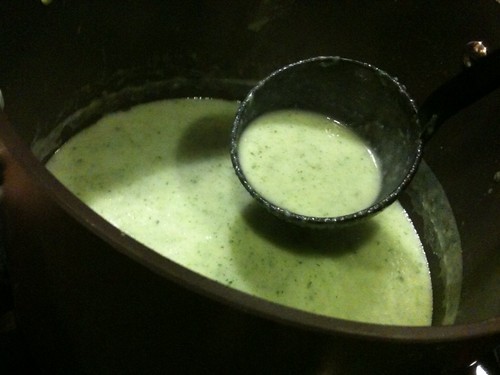 The weather has definitely been a topic in the news. So, why should it be any different on a cooking blog? After all, you gotta stay warm! Soup is certainly key to warming up the inside--not to mention, it's often a great assistant in losing or maintaining weight if that was part of your New Year's Resolution.

But if you're reading this post in the summer, the recipe card says you can eat this soup cold, which Paul did with the leftovers at work the following day. He said it was fine. I thought it was almost better cold. I assure you it's good to have such a versatile soup in your collections.

I picked out this recipe quite some time ago from my Moosewood Restaurant Soups and Stews card deck, but didn't buy the spinach (due to sales, etc.) to get the job done. However, after Paul's folks left, we actually had the ingredients to put this soup together, and I have to say I was quite happy with it. It tasted like potato soup, but had a pretty green color to make you think it would taste differently. That's a great way to sneak healthy greens into a meal. I think next time I will add even more spinach to get the additional nutrients. Also, I added water instead of the broth/vegetable stock the recipe called for. (The recipe said you could use either one.) I think that didn't help the soup because it lacked additional veggie flavor. Not to mention, if you've cooked much at all, you know potatoes require LOTS of salt to taste good. Since, my joints are swelling so much these days, I try to really limit my salt intake. I just put seasoned salt on the table so Paul could add as much extra flavor as he wanted.

The recipe card recommends topping the soup with homemade croutons, and I thought that was a very good idea. I didn't have the dried herbs recommended; so, I used Italian Seasoning instead. They came out just fine. Croutons are a great way to use up stale or too-hard bread that you thought looked fabulous at the bakery. (This bread was in the latter group.) You don't have to just toss those items! Freeze 'em til you need 'em.

I don't have a good idea how much the soup cost to make because Paul's parents did the grocery shopping while they were in town. I know I had paid $1.99 for 5 lbs. of potatoes and I only used 3 cups. Our milk is priced high at over $3.00 a gallon, and the recipe called for 1.5 cups. I suspect spinach and celery were cheap because there was little of it. No doubt, this is an elegant, budget-friendly meal. If it stays this cold outside, we'll be making it again really soon.

What kind of soups are you making to warm you up this first week of the new year?