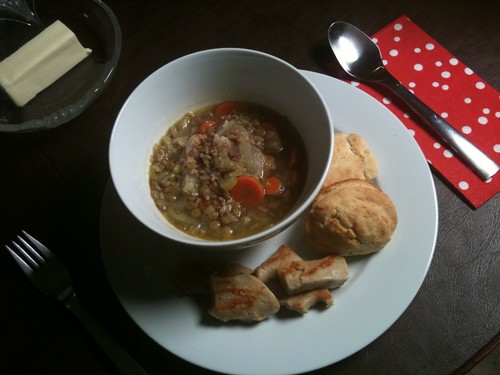 I have a confession to make. I'm not as much of an adventurer when it comes to food as most people think. In fact, I'm really boring and conservative. So much so that I thought about adding to my New Year's Resolutions that I would try a new food every month or so, but was too chicken to do it. Well, maybe I should have added that resolution because already in one week I've tried two new foods! First were the cheese curds that I used in a recipe on Sunday. Then came the lentil stew pictured above. I based it on the gluten-free recipe from Lisa Hardinge, but couldn't follow it explicitly because I lacked potatoes, etc. As proud as I am of these successfully delicious creations, I cannot take all the credit. After all, I didn't go out and buy the items myself. The cheese curds were a gift from my aunt and uncle. The lentils were acquired when Paul's parents were here. I guess that means I still have a long way to go in the "adventurous" department.

This recipe went a long way in making me feel productive for cleaning out the cabinets and fridge. That probably made it taste better than it would have otherwise. I will say don't believe what the bag says about Publix lentils not needing to be soaked and only needing to cook for 20 minutes after being brought to a boil.

Once again, I haven't a clue how much it cost to make this stew because 1) the onions came out of the freezer and I don't know which batch I had originally purchased them from to have an accurate calculation, 2) the lentils and celery were stocked by my darling in-laws, 3) I think my husband bought the carrots, which means the receipt is AWOL. Still, you can make your own calculations and agree this is a great, budget-friendly, fiber-rich stew. It was certainly nice during our cold front. Know that if you are making this stew or soup after you haven't been to the grocery store for a while (like me), you can add and eliminate ingredients pretty easily.

Something new I learned and really appreciated with this recipe was that the onions had been pre-sliced and frozen some time ago when I had more energy than I do now. I noticed as they cooked down, they added more water--more flavorful water--to the pot.

In soup pot, warm olive oil and add onions. If the onions are frozen, they cook faster, so add the celery and carrots pretty quickly after the onions are coated in oil and warmed. Add the water mixed with the McKay's, then the lentils. Bring all to a boil, turn down to medium and simmer about 30 minutes. That's what it took for me, and they were still a little crunchy. Add the rice and warm through. Add less rice or more water for stew.

The sides are not gluten-free. Worthington Skallops are from a can and pan-fried in just a touch of oil to keep them from sticking. The biscuit recipe came from Smitten Kitten and tasted so good dipped in the broth.