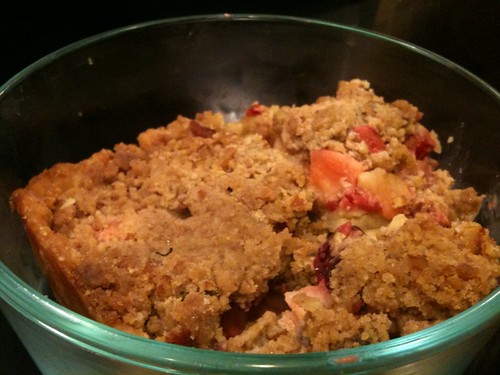 I'm sorry to say this is not the best photograph I can take. Moreover, I'm sorry to say I didn't think about taking a picture of it when we first made it. It was a huge pile of covered fruit in the middle of a glass 9 x 13 pan, and I wondered if it would all stay in there. But it did, and it was magnificent.

This dessert followed gumbo for a large family gathering just after Christmas. My mom and I used flash frozen cranberries (which I was slightly nervous about at first) and the flash frozen apples I had laboriously peeled and cut myself back in October. The great thing was how the recipe focused on the natural flavors of the fruit and had exceptionally less sugar than you would expect from a dessert of this nature. I suppose it made a difference that we used my mom's pie crust recipe--that is generally more salty--instead of the one in the magazine. We were already making the crust for another project and just decided to keep on with the same recipe for the crumble. We doubled the recipe to fit the 9 x 13 pan and ate on it two more times after the big meal.

My complaint is that I think there is too much butter in the recipe. I will look for an alternative the next time I make this. And, oh yes, there will be a next time! I suppose you could just eliminate the crust altogether at some point. I am sure there are numerous possibilities. One more very cool thing is that the pie can be baked immediately and kept at room temp for 1 day. This means it can also be served at room temp, rewarmed, or even chilled. I think we ate it all three ways.

I have searched the Gourmet website and cannot seem to find the recipe for this, but I found it in the last issue of the mag. So, I recommend going to the library and copying off the recipe or emailing me to send it to you. Cause it's definitely a keeper.