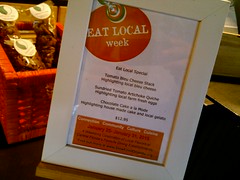 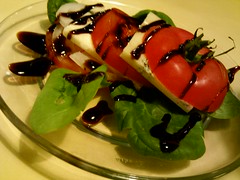 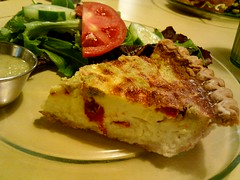 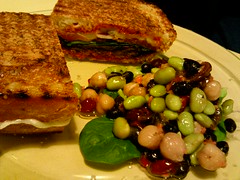 We dined at Infusion Tea tonight even though it wasn't as early as I had planned. Even at 5 and 6 o'clock, there was a nice stream of diners at the restaurant, which is always encouraging. Generally a full restaurant suggests a good restaurant.

I don't think I've ever been disappointed by Infusion Tea. Tonight was no different. They even offered a Prix Fixe menu in honor of Eat Local Week, hosted by SlowFood Orlando. Paul ordered the Prix Fixe option, which I passed on because we're pretty sure blue cheese isn't recommended on the diet of pregnant women. Although the restaurant is all vegetarian, there are some vegan options that are clearly marked on the menu. The clear details make ordering carefully much less stressful.

The wait staff was wonderful and even asked if we wanted Paul's entire meal to come out at the same time as my sandwich or if we wanted it to come out in courses like it was meant to. I voted for courses, and the three courses flowed very smoothly in order. Paul's meal started with a beautiful tomato/bleu cheese stack laid out on a bed of spinach and onions and dressed in balsamic vinegar. Next came an artichoke and sun-dried tomato quiche served beside a salad with honey dijon dressing. The dressing was very good, the salad ingredients fresh, and the quiche very light. The crust on the quiche was absolutely the best, and although I am not a fan of artichokes or sun-dried tomatoes, there weren't too many of either one mixed in with the eggs, so I found it more than edible. The eggs themselves seemed very rich and kind of creamy, which made me think there might have been cream cheese in the recipe. Whatever the case, it tasted just fine. However, because it was so rich, it was nice for us to split/share our plates half way through our meal because a whole quiche slice might have been too much for one person.

My panini was really good. Not greasy at all, and the bread was toasted perfectly. It was a fresh--but not green--eggplant well marinated because it wasn't bitter and layered between fresh red onions, spinach, tomato sauce and some very good provolone cheese. I could have finished the whole thing, but I was willing to share with Paul because I was also craving some salad. (Still!) The salad accompanying my sandwich was a three-bean of unusual, but really good mix--black beans, garbanzos, edamame, and cranberries on top of spinach and sprinkled with a sweet dressing. Paul downed it quickly. I tend to like my beans more salty; so, although I ate some, it wasn't as much my favorite.

Paul's meal ended with a medium-sized slice of chocolate cake and a scoop of gelato on the side (which he did share with me). The gelato seemed odd because it melted quickly and looked rather watery. In a bowl, I suspect it would have been easier to eat. The flavor was good, but not necessarily creamy. The cake wasn't too rich, which matched the more rich, frozen-mousse-textured icing. I thought I tasted a hint of coffee flavoring in the cake, but couldn't get a firm conclusion from my taste buds. The cake was a nice ending to the meal, but I don't think it was necessary.

Conclusion? Go to Infusion. This week with its special menu or some other time with the regular menu. Either way, it will be a good experience.