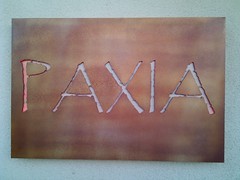 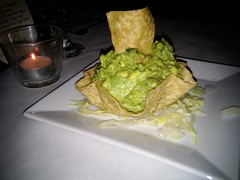 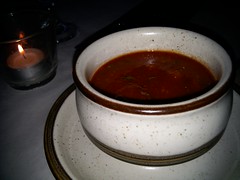 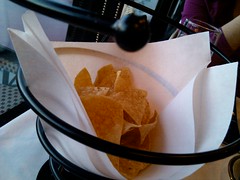 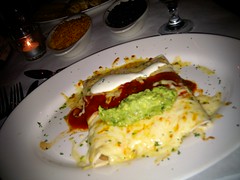 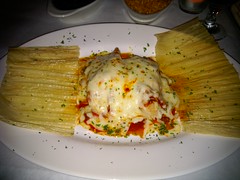 The first time I heard of Paxia, I was getting off of I-4 and saw a guy dancing around with a sign saying it was the best Mexican restaurant in Orlando. The next time I heard of Paxia was less than a week later when I was researching the restaurants participating in Eat Local Week sponsored by Slow Food Orlando. Tonight we chose to dine there mainly because I couldn't remember any other restaurant on our list and it was close by--because it was getting late (like 5) and I was very hungry. Boy, was I glad it was the only one I could think of!

Let's start with our entrance into the restaurant. This is only the second restaurant I've ever seen that actually tries to sit people in the windows first so that the place looks full. Of course, by the time we left, the place was full so it didn't really matter! But, it's a wise marketing move. The greeter who seated us was the first person at any restaurant we've been to this week to completely explain the concept of Slow Food, and he did so in great accurate detail.

Unfortunately, the Prix Fixe menu didn't have any vegetarian options. However, at the bottom of the daily menu, there's a note that tells you to ask for vegetarian options. The waitress, Hayley, said you can order any item on the menu as vegetarian because everything is made fresh. At first there was a bit of confusion, and she thought the refried beans had lard in them, but they don't.

Chips and salsa are complimentary. The chips were thick and warm; salted, but not overly. Paul promptly declared the salsa the best in Orlando (and you know how addicted we are to salsa!) One of the greatest things is that the salsa isn't too salty, so when combined with a salty chip, you aren't overwhelmed. We ordered the guacamole appetizer, which came with some more chips. Both sets were delivered in a wire spiraled bowl with paper lining the inside of the cone. It was a nice presentation. My annoyance was the shape of the salsa bowl. The taper made it difficult to scoop out all the salsa. Paul finally took a spoon to it. Yeah. It's that good.

Our entrees were amazing. Paul had the refried bean burritos with a stripe of guacamole, a stripe of mild salsa, and a stripe of sour cream across the top. Cheese was only on the outside of the burritos--not in and out--which kept them from tasting too cheesy. That being said, my tamales look like a giant ravioli covered in an inch of cheese. That really wasn't the case. The tamales tasted like corn grits wrapped up neatly and topped with salsa and a thin layer of cheese. Black beans and rice were served family style in the center between us. Both of those were also very good.

We had a positively amazing time at Paxia. If I had to find a complaint with the meal, it would be to recommend extra salsa on the side as the tamales were a bit dry (most are). I also want to point out that the menu specifically asks for patience. Because the food is made fresh to order, it takes some extra minutes to be delivered. I have no idea how long it took. We were enjoying ourselves too much to time it. I will say that the no-rush service makes Paxia a great place to bring friends because the food doesn't interfere as much with socializing.

Up until now, we've thought that Paco's was unmatched in Orlando. But, Paxia is certainly a good contender. Paxia is a dressier restaurant with more upscale selections (like fajitas and tamales), but also offers a higher price tag. It's hard to really compare the two. We can only say they are in two different classes.

Awesome review. Going to eat there tonight. Can't wait! May have to order two servings of the guacamole because your photo makes my mouth water just thinking about it!

Well, thank you very much. I hope I did the place justice and hope your experience is just as positive. Please email your opinions after you finish dinner.