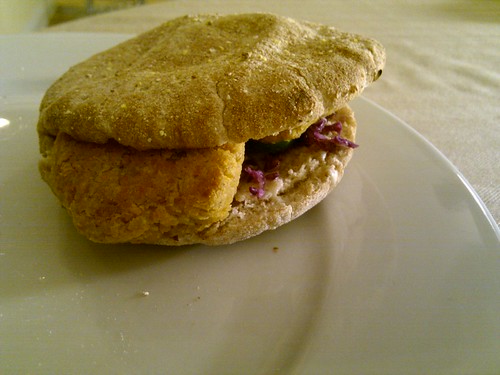 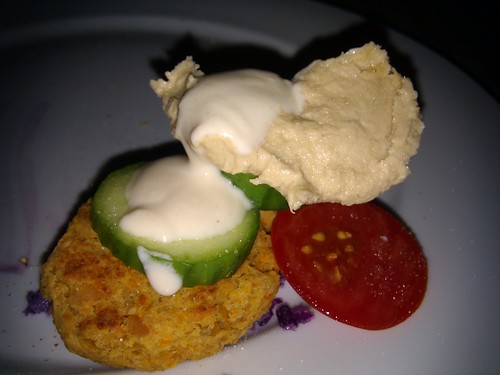 Three of the magazines I subscribe to: Parenting The Early Years, Parents, and Bon Appetit, had falafel recipes in their March 2010 issues. (Sorry, only Bon Appetit seems to have their recipe on line.) Is this some special month or just falafel screams "SPRING!"? Either way, the stories brought back great memories of our research of "The Best Falafel in the World" when we were a couple weeks away from a trip to Paris last year. The difference being, we are in Sunny Florida and no where near the Stravinsky Fountain. I knew I just had to give one of the recipes a shot.

After a little comparison, I chose the Parents recipe, and was quite happy with it. Just for kicks, I may try the others. . .or I may track down someone who has a secret ingredient that will make it out of this world.

The reasons I chose the recipe from the Parents magazine are as follows: It actually calls for tahini in the falafel. I love the garlic in the recipe (although might have enjoyed adding a hint of onion, too). The carrots are a great way to "sneak" additional veggies into the meal, which was the topic of a recent post. And the fact that it was the only recipe that was baked and not fried. (We had the conversation that, yes, the fried likely tastes better--what fried food doesn't--but we also have a desire to keep things healthy.)

I absolutely love the concept of falafel. I was stunned at how easy it was to put together. I literally just needed my food processor, a bowl for mixing (because I have a small food processor), a pan for baking, and the necessary spoons/knives and measuring utensils. Clean up was a breeze with such little items to mess up. The recipe says to mash all the ingredients together, but you can blend them just fine in the processor and skip the step of shredding the carrots or cutting the garlic.

I think the concept of the falafel (especially this particular recipe without the hot oil for frying) is very kid friendly because kids love to get their hands in food. Rolling the bean mixture into balls, flattening them a bit, and laying them on a greased jelly roll pan is just like baking cookies. Only you are making something far less sugary!

We were a bit disappointed in the dip part of the recipe, and my mother doctored it up just like I would have. It starts out with just lemon, tahini, and yogurt. But, she added a good dash or two of salt and a good assistance of garlic and onion powders. The result was a fabulous dressing to mix with the red cabbage (an idea that came from our Paris dining experience) as a slaw and also enough to drizzle on top of the sandwich. It was very yum. We thoroughly enjoyed it. I would make it again in a heartbeat only I'm out of garbanzos and have made myself promise to eat what I already have in the cabinets!

As for the price of the meal, we made it less budget-friendly than is possible. We acquired a large tub of tahini for $7.50 and have determined it must be cheaper elsewhere, but we don't have a large variety of grocery stores nearby. Also, store-bought multigrain pitas generally come with a hefty price tag. Making your own or even using another bread could cut the price. Naturally garlic, carrots, and beans (canned or dried) are cheap items. The other prices on veggies depend on the season. So, just play your cards right. But definitely give it a shot. You'll be proud of trying something new and the ease of making it yourself (even if you want to include kids in the kitchen) will brighten your entire day!

could you post the actual recipe for your falafel and sauce?
thanks!