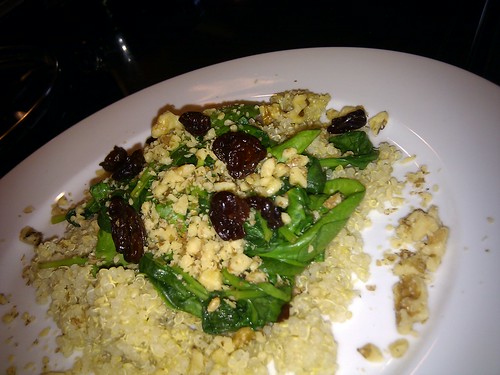 Paul and I are sorry the photograph leaves a lot to be desired, and I promise it does not do the recipe justice.

During my last trimester, I think I did some pretty good shopping. One thing I crazily purchased (but Paul agreed to buy it!) was Organic Quinoa at Costco. Naturally, I can't find the receipt to tell you how much the giant bag cost, but aside from it taking up a good deal of space in the pantry, I've decided it's well worth it.

The quinoa itself is a bit time-consuming to cook. Boil water, watch for 15 minutes, fluff and cook for 5. it has a very earthy flavor and may be an acquired taste, but as I told my mother last night: When you find out something is good for you, you just have to make a commitment to make it work.

Then, I made a recipe from Mollie Katzen's Eat Drink and Weigh Less to go on top. Braised Greens calls for any dark leafy greens, but I have spinach in the fridge and I've learned that spinach is the healthiest of the dark green veggies; so, I used it. And yum! It's so creative to cook spinach and top it with toasted walnuts and dried cherries. (Love our dried fruit. We stock up any time we're in a city with a Trader Joe's.) I heated a little extra broth (McKay's Vegetarian Chicken Seasoning mixed with water) with the spinach because I remember the quinoa I'd had in restaurants being a bit dry. It made a nice sauce. I think I made the right move.

Paul was floored by the recipe. I absolutely loved the color colorful view as I ate. This was such a quick recipe after I had pre-made the quinoa the day before that it will easily inspire additional recipes. Paul even asked if he could take the same meal for lunches. I told him that would be nice, but I don't know how the spinach would hold up. That's an experiment I think he's willing to risk.

One thing that's fabulous about this recipe is the nutritional value in it which, in my opinion, makes it easily classify as a meal in and of itself. Protein is about 12g and fiber is about 9g. Both of those factors help it qualify as a good quality meal to help get me back down to my pre-baby weight. And I'm thrilled to know it's tasty, too!

I love quinoa! I make it just as you would make rice in my rice cooker and it comes out perfect. I'm gonna have to write this recipe down. It looks very good!

Sounds tasty. We have an awesome recipe for Barley too.

Oh, that sounds significantly easier. What ratio of water do you use?

I use two to one I think. More or less depending on how soft I want it. Two to one usually gets a nice rice like consistency though.