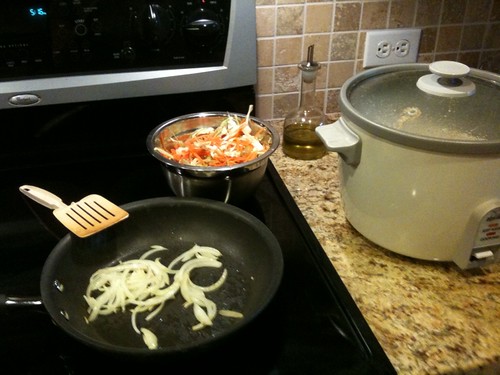 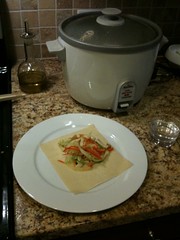 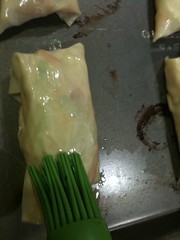 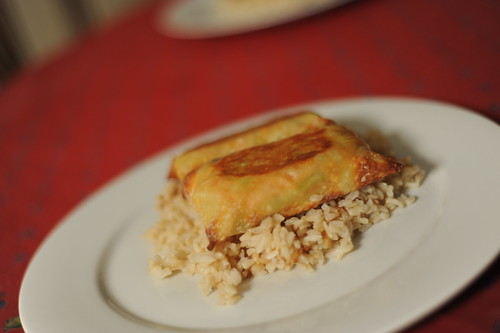 See, we don't eat a lot of fried foods. I ate enough french fries when I was a kid and okra isn't in season yet. So when I decided to make eggrolls or cabbage rolls, I felt it would be a very expensive undertaking to fry them in so much oil when I wouldn't reuse the oil. It would go to waste! I did some research on what temperature other people recommended baking eggrolls on, and I gave baking a shot. I was so happy with the results that I served them to my parents and grandmother the next night.

When I went to make my calculations, I couldn't believe how cheap dinner actually was for just Paul and I. Then, when you think about doubling it for 5 people (but my grandmother and I mom aren't as big of eaters as I am)--wow! What an economical and tasty meal! Now that being said, I actually had purchased bean sprouts to add to our eggrolls the first night and forgot them. So for the second night there's about $1.49 addition. No worries. It's healthier (after all no fried food, no MSG) and still much cheaper than dining out.

And for those who think that more ingredients equals more clean-up. . .not so fast. A list of the utensils I used: rice cooker, two knives, cutting board, garlic mincer, spatula, skillet, spoon for dishing, and the jelly roll pan. I measure seasonings withe the eye and hand. Everything goes in the dishwasher but the pan. Clean up is a breeze and can almost be completely finished while waiting for the eggrolls to bake. I can't wait for cabbage to go on sale again and inspire another great recipe creation!

I've learned in my travels that different people may use different amounts of oil for the same tasks. At most, I would use 3 Tablespoons. Hopefully, we would all use less.

Pull out eggroll wrappers and lay on plate at an angle. Dish large spoonful into wrapper. Fold the corner closest to you up. Wet remaining sides with dash of water. Fold corners on sides in and corner farthest from you toward you. Brush with remaining olive oil and lay seems down on jelly roll pan or cookie sheet. Bake on 425' for 15 minutes, turning halfway through. Serve over rice.

My preferred sauce recipe is taken from Moosewood Restaurants Cooks at Home--lime, ketchup and soy sauce. Since I didn't have lime, I mixed 1/2 tablespoon tahini in 3 tablespoons soy sauce. It does have a strong flavor, but I think it works.