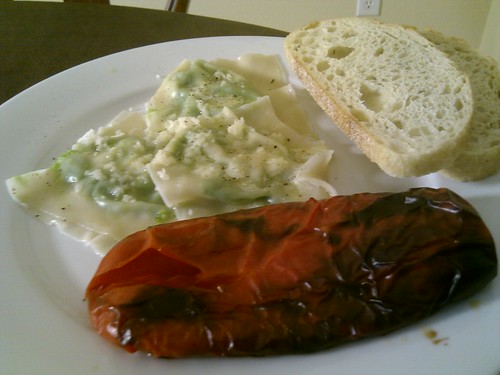 I hate to admit this since I am supposed to be a healthy vegetarian, but. . .I hate peas. And I hate red peppers. So, why in the world did I start my week off with a dinner of the vegetables I like the least in this world? Well, for starters, I brought home a beautiful red bell pepper from the Maitland Farmer's Market on Sunday, and Paul told me how much he enjoyed the roasted bell peppers his mom used to make. Second, I had a few leftover wonton wrappers from eggrolls last week and was looking for an unusual way to use them. (Come to find out, there are more than just this way.) And, the excuse for even having peas in my house is that Paul likes them. So, when he gets peas for dinner, I get brussel sprouts. (Not that he doesn't like brussel sprouts. He just likes peas more.)

The recipe for the Ravioli was on the "Contents" page in the May 2009 Gourmet Magazine. I thought it was unusual, and filed it in the back of my head as a potential meal sometime. I visited about.com for a great video on how to roast a bell pepper. Both recipes were a success. And surprisingly, I actually like roasted bell pepper a lot and am starting to create other recipes in my head that might could highlight the fantastic flavor in a good, local, bell pepper. This time, I just served it straight on rosemary olive oil bread. So good!

As for the peas, I learned I would much rather them whirled in a food processor than straight. Paul said the entree was really good and thought the wonton wrappers made a superb pasta. I loved that the homegrown, dehydrated mint (recipe called for fresh) gave a fantastic flavor to offset the garlic (not in the original recipe, but was afraid I couldn't eat it if the peas weren't covered up with strong flavor). Just a couple of notes if you plan to make the recipe yourself: maybe drizzle a little cream sauce instead of the butter. I didn't see any improvement from the butter as a sauce. The serving size appears to be right on; I think sometimes that's unusual. However, I don't see how you could make a full 32 ravioli without some of them getting cold. I only made 6--all cooked at the same time--and they were cold before we sat down. Sad. But, still good.

For those who wondered what I would have eaten if I didn't like what I had served myself, there's a big salad for each of us not in the picture!

I'm having a hard time finding the Pea Ravioli recipe on line. I decided to just post it here.

Courtesy of Gourmet Magazine, May 2009

Put a rounded tsp filling in center of a wrapper. Lightly brush edge of wrapper with water, then place a second wrapper on top and seal, pressing out any trapped air. Repeat with remaining wrappers and filling, keeping ravioli covered as you work.

Boil Ravioli in 2 batches in a pasta pot of salted boiling water until tender, 2-3 minutes per batch, removing with a slotted spoon. Drizzle with butter and sprinkle with more cheese and pepper.