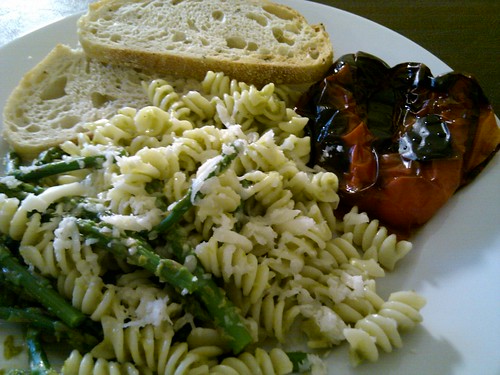 Yep. It's for real. I still like roasted red peppers. Only took me 28 years to learn this. This time I tried it chilled. Nope. Warm to room-temp is best. But still like it. Paul called it perfect. Wow! Don't think he describes much I make as perfect. Can I serve it every day?

As for the pasta. I didn't get it. It was simple and I liked every ingredient. But for some reason, it just didn't hit a cord. Why? Still don't know. The recipe was from Moosewood Restaurants New Classic Recipe Book. It dirtied a few more dishes than I would have liked (bowl for cooling asparagus tips, extra pot for reheating the pasta once it's all mixed together). But I really wanted to like this recipe. In fact, I didn't even imagine I wouldn't. I'd been looking forward to it all week. After first blanching the asparagus in the boiling water and then boiling the rotini, I noticed just that 3 minutes really added flavor to the water and therefore added extra flavor to the pasta. The sauce of blended lemon, oil, and asparagus stems seemed so brilliant. But when it all got together. . .I was really disappointed. Even Paul shrugged his shoulders.

Why didn't the pasta make the grade? First Paul thought it was the shape of the pasta. I thought the shape made sense as pasta sauce likes to get caught up in rotini. I wondered if it was the Pecorino cheese topping, but it wasn't old or bad or anything. Finally, Paul just assumed that the asparagus wasn't at peak perfection. It certainly wasn't bad, and I'll use the rest of the bunch tonight, but it wasn't farm-fresh, just-picked-Sunday yummy. So, it's easy to say this recipe isn't tops because you can't make it with your worst looking veggies and still get good results. And let's face it, we don't get to go to the vegetable stand every day like we live in Rome. So in our house, this recipe has had its chance and failed.

I don't like sharing bad kitchen experiences on our blog. Cooking is hard enough without the devastation of knowing someone had a negative experience. And we're the type of people who think food should be amazing. I thrive on the idea of waking up every morning and creating an out-of-this-world menu for the evening. Not to mention, I want Paul to have a nice meal to come home from work to. I guess last night just wasn't the night. Oh well, at least the red pepper was perfect.