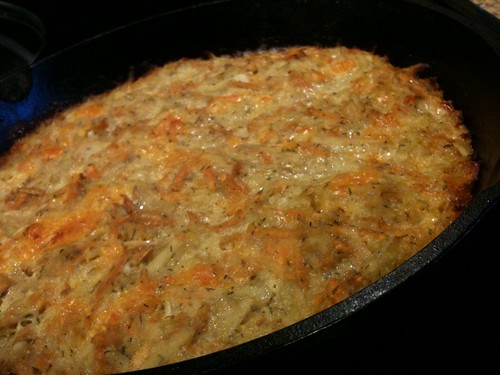 Last week we had fabulous potato quinoa pancakes from Coming Home to Cook; so I figured a sweet potato gratin from Moosewood Simple Suppers cookbook would go over well, too. Well, it didn't.

I tried to double the recipe, but my iron skillet was too small. I had to put some of the potato mixture back in the mixing bowl, but the eggs stayed in the skillet. The dish came out looking like a frittata! Paul and I thought it still tasted good.

The problems were: I didn't realize it wouldn't be that much food to serve my folks and us. Edamame was the vegetable. But my father doesn't like eggs! (Yes, I know it was bad to try to sneak eggs into the meal, but I didn't know they would be visible. He does eat them. He just doesn't like knowing they're there.) So, Dad got a veggie hot dog, and Mom cooked up the remainder of the potato mixture on my griddle and served him "sweet potato pancakes" instead.

The russet potatoes browned quickly after shredding. Shred the sweet potatoes first and get it all into the skillet pronto. We had cheddar and dried dill instead of dilled Havarti, which the cookbook said would be fine. They were right. I also thought there was enough cheese and grease (from the extra oil I had added cause of the "doubling" idea) and elected against the cheese topping. No one complained. The pancakes turned out a bit greasy, and they had no added eggs or oil! They didn't reheat well as leftovers either.

My mom shook her head as the family left and warned "don't try that again." Not sure if she meant the sneaky egg part or the gratin itself. I really didn't think it was that bad. Just for Paul and I, I might try it again.