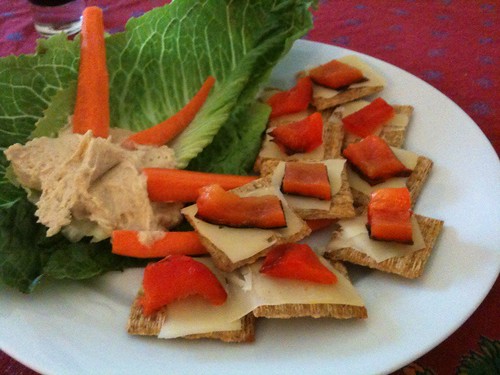 I was playing around with the concept of how much Paul loves roasted red pepper on Sunday. Being so near a cleaned-out kitchen food-wise, I came up with this little dish that would make for a nice appetizer or a "sampler platter" with other items for a light lunch.

Following About.com, I roasted the red pepper and meanwhile spread out Triscuits on a jelly roll pan. (I only had the original kind, but I think the low salt ones would work better. Come to think of it, a little toaster oven would work better, too, if you were just making enough for two.) I sprinkled onion and garlic powder over the Triscuits. When the peppers were done, I removed them and turned off the oven. Then, I placed the tray of Triscuits on the bottom rack to warm. (Don't forget to wrap the peppers in aluminum foil.) I topped the Triscuits with slices of mild Jarlsberg Cheese and then a piece of the finished chopped bell pepper.

Judging by Paul's reaction, I can't say it was a big hit. He thought the Triscuits had too much going on, and honestly, he is happiest with the straight bell pepper on a good bread. But, given the right opportunity, I think this could make a very nice, simple, and quick to make appetizer.