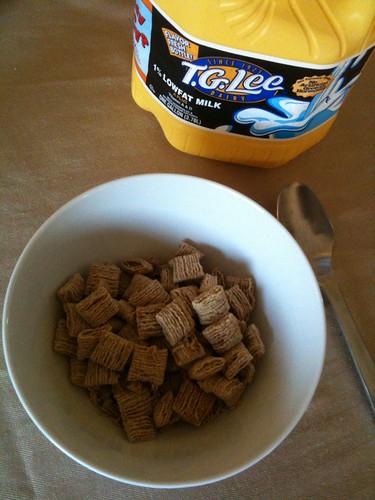 I was running dangerously low on cereal. I went to Publix and came across the Quaker Oats Squares on BOGO (buy one, get one free) with $1 coupons beside the boxes. (At my Publix, you can use a coupon on the purchased product and on the free one.) Although it was more than I would like to pay normally $1.25 for a box of cereal seemed like a good deal since I was about to be desperate for cold cereal and could review it for EatLikeaRabbit.

I bought one box of the Brown Sugar and one box of the Cinnamon. We opened the brown sugar first, and I loved it. I felt like I was eating the healthy-for-you Shredded Wheat, but it didn't taste as bland. I noticed even Paul, really, really not a fan of sweet cereals was also sneaking some of my brown sugared squares. (Paul does eat Shredded Wheat.)

Then, I opened the cinnamon box (pictured). It reminded me of Cinnamon Toast Crunch, only exceptionally less sweet. It certainly tasted more like sugar than cinnamon in comparison to the Kashi, which had a strong cinnamon flavor. I will definitely buy the Quaker Oat Squares again, provided I don't have a cheaper deal around. (After all, I'm a cheap-skate firstm and can get Cherrios pretty cheap sometimes.) But I'll definitely and happily stick with the "Hint of Brown Sugar" variety instead.

And for those of you following how we're trying to up our fiber intake, I highlight the nutritional value. The real selling point for this cereal was the 5g fiber per 1 cup serving--a very good deal.