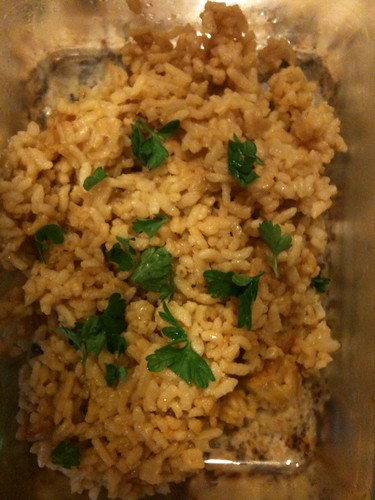 It was the end of the week. We were leaving the next day to see Paul's family. I hadn't bothered to grocery shop for the week knowing we would live on what we had since we would be away for a long weekend.

Then, Paul called to tell me he was bringing the boss home for lunch. Now, honestly this isn't so unusual. Paul's boss is female. And I've actually known her a little longer than Paul has, and not in a work environment. (And just for the record, our connections did not get him the job!) Some people might find such a relationship uncomfortable. But since Fely and I are such dominating and outgoing personalities, we get along famously and have no issues spending time together outside the office.

That being said, Fely and Paul spent the first part of their lunch break "test-driving" pianos at a "dealership" where Paul says they employ "used car salesmen." Paul thinks we need a piano for Nora. She needs the opportunity to play if she desires. I agree. Since Fely is an accomplished pianist, we asked her to help us chose a beautiful sounding instrument. Her insights were very valuable. The funny thing was that she went around the shop playing chopsticks so no one would know how well she did play. Otherwise, they would have been a good deal more pushy.

Fely's payment came in the form of food, which as you recall from paragraph one, we had little of. Luckily, I had made a special trip to Publix for our house guests on Monday. Garrett really wanted falafel, and Paul wanted lettuce to accompany it. We also almost always have carrots and celery around. I thought At least we can have a salad. Thinking through my pantry very quickly, I decided on risotto, which takes little ingredients even if lots of time.

I quickly diced the onions and measured out all of my risotto. I had just enough! God does multiply the loaves and the fishes! I pulled the step stool up to the stove and educated my five-year-old helper about how to slowly stir to not break the kernels. I also reminded her the stove was hot and to not splatter the food and burn herself. Then, I showed her how to open the packets of Savory Choice concentrated vegetable broth and mix with water. Our 40 minutes of stirring ended a few minutes before Paul and Fely walked in the door. It was a lot of work, and I'm really proud of Graycen for not complaining because she was standing the whole time.

Once again, the Savory Choice broth really did the trick. It gave the risotto great flavor with as little sodium as possible. And you know what? No one added salt at the table! It goes to prove that although you need salt to give something flavor, you don't need as much as most people think you do.

The presentation had a rich brown tint, which I like much better than the yellow tint that comes from vegetarian-chicken broth or other vegetable broths. Also, some vegetable broths are excessively sweet. This one wasn't. However the table got a wave of giggles when after I gave the credit of the meal to Graycen, she was asked what made the rice brown. We had just finished making sweet potato chocolate chip muffins, and Graycen stated matter-of-factly "Chocolate."

Disclaimer: The Savory Choice vegetable broth was a free sample sent by the company. The above opinions are my own. The broth is available at Publix.