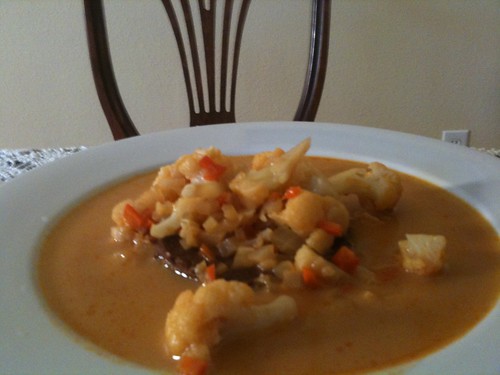 Last night's project requires a lot of explaining. One of the first contact emails I ever received on Eat Like a Rabbit was from my mother-in-law recommending the Cauliflower Paprikash recipe in Moosewood Cooks at Home. It has taken me these two years to get up the nerve to make it--with a few adjustments.

Originally, my menu for the week was to serve the recipe with cornbread and baked beans. Clearly, as some of you might have noticed, I didn't actually research the redcipe before making it. Therefore, I had the wrong accompaniments planned and didn't exactly have all the ingredients.

When I learned this recipe fell under the "Stews" chapter in my cookbook, I started getting nervous. Paul doesn't believe in eating soup in the summertime. Since it was pushing 100 degrees yesterday, I wasn't keen on the idea myself. But I took the plunge, did a quick overview in my fridge, and saw no reason I couldn't create a real entree out of what should have been a winter stew. After all, I had a lot of cauliflower that needed matching recipes. And I figured I could hopefully buffalo Paul into thinking it was just another sauce recipe like we'd been trying. It didn't work.

The ingredients I didn't have to make the stew/sauce were mushrooms, dry sherry, and sour cream. So, I did a bit of computer research and found alternatives in my cabinet. For the meaty mushrooms, I came up with the Redi-Burger

patty substitute. Then, I learned that dry sherry is supposed to have a salty flavor. I replaced that with vegetarian chicken broth. Lastly, none of the ideas I read sounded appealing; so I added milk, a touch of lemon juice, and onion and garlic powders to replace the sour cream. Although it certainly didn't have the strong flavor sour cream has, it certainly did the trick. In fact, the more mild sauce was great on the stronger Redi-Burger.

Maybe it didn't look so hot. Perhaps I could have presented it better. (Remeber I'm not the designer.) But it really was good. Definitely better than edible. However, it's probably not something I would serve to guests just because it's a little more unusual. But for us, it worked just fine.

I ended up with a bit of excess soup as Paul was all for eating the chunky cauliflower, onion and bell pepper, but had no desire to have extra "sauce" (even though it was delicious mopped up with rosemary bread). The liquid went into a glass bowl and was frozen to be added to a real soup come the first signs of, oh say, 69 degrees in Florida.

Do you make winter meals do just fine in the summertime? Or do you like to focus on the fresh vegetables that are in season?