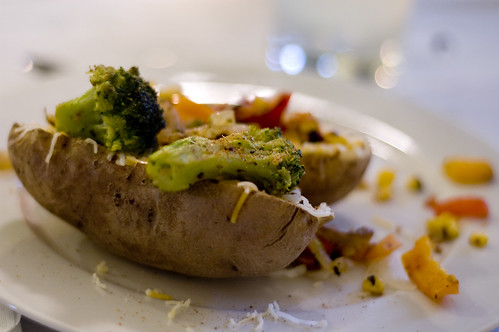 I really shoulda-coulda-wished I'd taken a picture of my entertaining meal tonight, but Nora was crying and needed to eat and not many people waited for me to get things together on the table before jumping in. The photo above is appropriate although not exactly accurate.

Before Nora, I was on a television show at church. It took about 4-5 hours of your time one night a month. I didn't know how I could ever accomplish the task, especially if Paul wouldn't get off in time for me to be there and the church is not on the way home from the hospital for him to fetch Nora. Instead of returning to the front of the camera, I decided to join the behind-the-scenes effort and signed up for cooking one night every few months or so. I figured at least I could bring Nora to the meal, and an occasional mass cooking adventure would be good for me and wouldn't take me away from Nora too much. The first hypothesis was true. I enjoyed myself very much. However, after spending an hour harvesting and separating the chives from the herb garden (on loan from my mom), I decided it really was taking me away from Nora more than I had hoped. However, the remainder of the prep-work was a cinch.

I made the baked potatoes by wrapping them individually and cooking them on two racks in the oven at 400 degrees for one hour. Questions included: Where did you get these huge potatoes? (Costco.) Could you fit them all [all 22 of them] in the oven at the same time? (Yes.) Are they still warm? Ow! They're hot. My parents' ice chest became the cooler-heater for the evening. Padded with beach towels above and below the mound of potatoes, it worked great for keeping the potatoes warm for the two hours it took everybody to come through and eat. Funny, no matter how many people talked about how large the potatoes were, only two were willing to cut their potatoes in half and share.

The quinoa salad does have a photograph to match. Besides pictures, I learned my lesson. Potatoes just might be my meal plan for every time I have to cook for the large group. Next time, I'm imagining chili potatoes.

Thanks Mom and Dad for the items on loan, and especially to my father for holding and feeding Nora while I served.

Cost for the Potato Bar