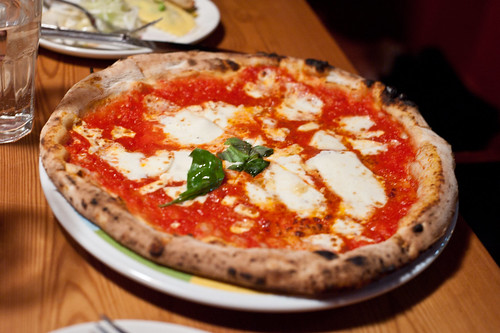 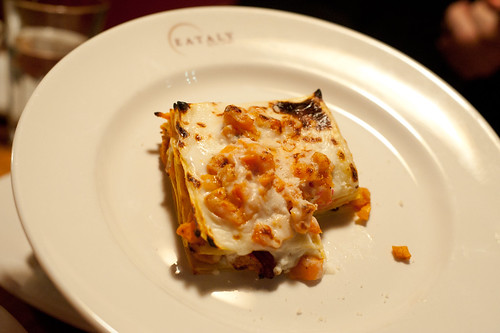 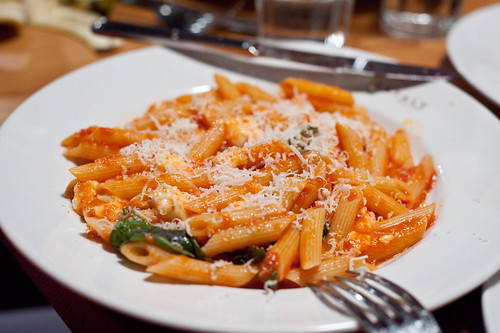 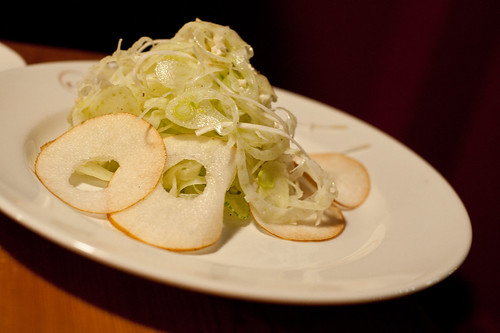 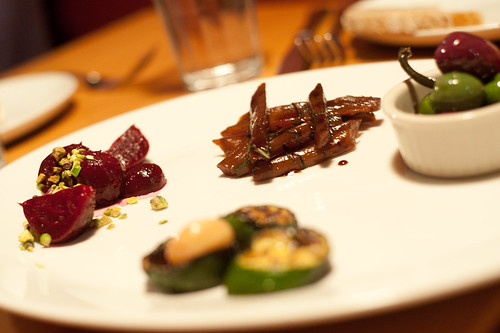 Sometimes, a picture is just worth a thousand words. And sometimes, it's so much more fun to look at pictures of a great meal than to read about it. So, I'll just describe the pictures briefly so if you go you'll know what to order and expect.

Eataly, is a newer spot in New York City where you can shop for fun, imported foods, and then head upstairs for dining--either overlooking the shopping or in a semi-private room with a curtain to draw. The benefit of the room? Warmer.

First, we have a typical Pizza Margherita. Sauce with sliced mozzarella cheese on top. This place had a coal fired oven for bread and pizza, which meant that the crust was nicely cooked and not greasy like typical "dine-in, carry-out, or delivery's." Next was a delicious butternut squash lasagna. If I remember correctly, the waiter said it was a favorite dish. It was also one of the most expensive, and I wondered if the slice was large enough to warrant the price. I had a basic penne pasta in a fabulous tomato sauce that I swore must have had at least a touch of cream. Just wonderful! Then, there was a cauliflower, fennel, and pear salad. The pear was fabulous. But we've already determined I'm not much of a fennel fan. I wouldn't blame the salad for that, of course. Another surprisingly expensive item for the amount of food served was the antipasti, which we asked them to leave the meat out of. The beets with pistachio nuts were quite good (and I really don't like beets). The olive bowl had some great olives. But my favorite was the marinated zucchini. Oh, if I could only duplicate that at home. . .but don't think I won't try. (There was also some kind of root vegetable on the plate. It was good, but we were unable to learn more about it.)

There was also spinach ravioli in lemon butter at our table, the special of the evening. I'm not sure where the photo went. But oh well, if it's a special, you don't want to get too attached to it in case it's not available when you go. And while it was lovely, I think I would have liked a touch more lemon to counteract the richness of the butter. But that's just me.

On a side note, the store also sells gelato. We stopped for a few cups on our way out. I noticed a couple of the flavors were freezer burned. The selection was very limited, and the flavors were more unusual. I'd ask for a taste test before I decide to buy dessert there again.

That food looks so good! You've captured some great pictures. I have some roasted butternut squash in the freezer to use up. Maybe I'll look for a lasagne recipe, or make one up :)

Cindy, I know you are talented enough to make up a good butternut squash recipe. But also feel free to try the butternut pesto lasagna recipe on our site!