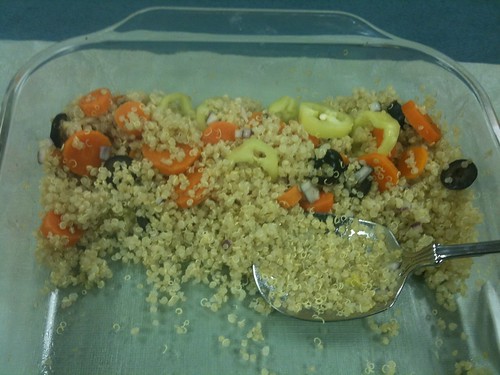 I made an Italian quinoa salad last time I cooked at church and it was quite a success. This time, I wanted to make another one. After all, it's super healthy, reasonably cheap, and really easy. I didn't do any special shopping for the salad, and quickly racked my brain to come up with a recipe using what I already had. That's when I remember the Morrocan Carrot Salad from the New York Times, which is how this salad got its name.

I was just thrilled with the outcome and thanked people politely when they said it was good. But then. . .a college student I have known for about 5 years passed me in the hallway between the recording room and the make-up room with a cupful of the salad. "What is this?" he asked. "Quinoa." I said. "It's fantastic," he replied. And I was almost giddy. Most of the time you think people are just being nice when they say "Amanda! It's wonderful!" But this was different. Normally very quiet, Michael clearly had something to say other than the standard "Thanks for dinner." And that was enough encouragement to make me think I'm really making a difference.

Paul once put a quote on my desk. Sometimes the easiest way to share Jesus is with a recipe. I want that to be my goal. So onto the recipe, of course there are lots of options, but this one was unusual enough that it went well with the falafel, which is often also a new taste for people. It could even soak up a touch of tzatziki without being a problem.

Oh, and let me make a note about the frozen celery cube. When I have some leaves of a celery stem, I hate to waste them. So, I blend them with a touch of onion in my food processor and freeze them in an ice cube tray. Then, I brake them out of the tray and put them in a freezer safe container. It makes food prep with a touch of extra flavor really easy. Obviously, this step isn't necessary. But it sure is nice.

Please visit the Total Cost post for the meal to see how much the salad cost to make.

Slice carrots equal size and put in microwave safe bowl. Add the cube of frozen celery instead of additional water. Microwave on high 4-5 minutes until carrots are easily pierced with a fork. Remove bowl from microwave, add half the cumin and all the garlic. Stir. In serving bowl, put quinoa, add carrots scraping liquid and flavors out, too. Add olives, onions, and peppers. Stir. Drizzle olive oil, lemon, and sprinkled and remaining cumin salt over top. Stir. Serve room temp to warm. Garnish if desired.