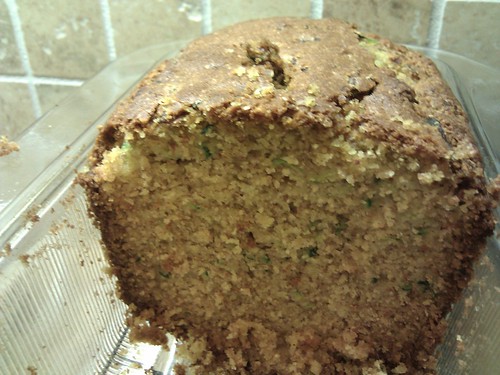 With all the zucchini we had lying around the house for two weeks, I immediately was attracted to this zucchini cornbread recipe from the July Bon Appetit Magazine. I liked that it had some whole wheat flour in it. And I'm learning to really appreciate cornmeal for the extra iron and little crunch. I immediately started telling friends about it.

Even greasing the pan, the bread did not eject easily when I tried to flip it out. So, we just sliced the bread inside the loaf pan which caused much of it to separate or crumble yielding unattractive slices. The bread darkened much more than it should have, and I finally removed the bread from the oven even though the tester did not come out completely clean.

While the corn meal naturally gave the bread a drier taste, it was very moist. I really enjoyed the flavor personally, but the family didn't like it. In fact, Nora refused to go past picking it up.

It was fun to make it once, but if I'm going to put that much effort into a bread and bake it for so long, I'll probably stick with banana bread. Since I told Paul this and he agreed wholeheartedly, I guess this recipe is now shelved. As an alternative, I've loved the cornmeal pancakes and corn scones.