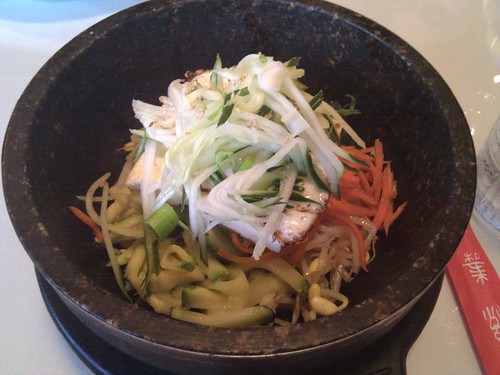 Some friends from across the street asked if we'd like to dine with them one night last week. We agreed, and were slightly nervous when they suggested a Korean restaurant called Seoul Garden. I had not had a Korean meal before, and we were hoping it would be vegetarian. (Pat knows we're vegetarians as she's hosted a mommy potluck before.)There were two vegetarian dishes on the menu. Or as near vegetarian as we could tell. The rough translation to English in the menu and the language barrier kept us from being positive. Good thing we're adventurous and have a smart phone! We had such a good time getting to know our neighbors better and experiencing a new kind of food!

At first, we were rather confused and nervous about the dishes. Paul looked up the definition of " bibimbap" on his phone. I was relieved to know it was just vegetables, Paul ordered the fascinating and very, very hot stone bowl pictured above. It came on a tray that protected your fingers if you needed to move the bowl. I don't think the bowl was cool even by the end of our meal. My meal came as stir-fried vegetables in a really great sauce. The waiter asked if we wanted hot, medium, or mild. Paul and I looked at each other. "Medium" said the waiter in his thick accent. "I think medium." And he was right. Not sweating under the eyes, but warm. Very warm. And so yummy.

Obviously, the stir-fry was what you might typically expect when it comes to vegetables--including broccoli, zucchini, carrots, abnormally good mushrooms ( I'm not the biggest fans of mushrooms.) all cooked to perfection. Then there was a side of fresh bean sprouts to be sprinkled on top. There was also a fascinating side of cilantro leaves marinated in chili paste. Hot, but with great fresh cilantro flavor.

Paul's meal had layers of rice, vegetables similar to mine, a brick of tofu, and a fried egg that Paul turned against the wall of the stone bowl so it would finish cooking.

And when they delivered the check, they also brought a plate of sliced watermelon. I loved that dessert was included in the price. And I loved that it was a healthy dessert that cooled the tongue after some of the spices we'd tried. We talked about how good it was all the way home.

Thank you Chris, Pat, and little Maddie for a fabulous evening. We really enjoyed ourselves.