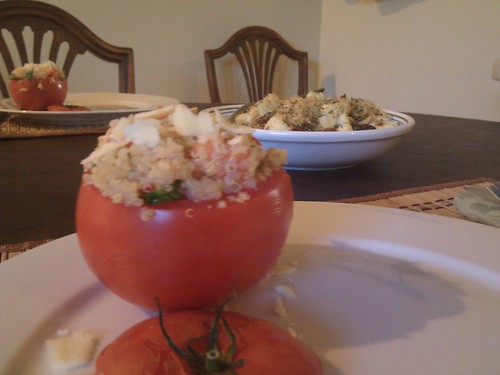 I thought I'd had capers before, but I didn't remember that pickled flavor. And I remembered them being a little harder. Paul said it was the best caper he'd ever had. He's not so fond of them either. But it doesn't matter. We've tried something new in our house this month and it's only the first day of November! i can't say I'll jump at the chance to make a dish with capers again. In fact, my father may find them in his refrigerator in the near future because he likes pickled things. But at the same time I remember that it took three or four times for me to make collard greens a success. So, I suppose it's worth another try.

You might ask what possessed me to purchase a little $1.32 jar of capers to being with. Well, you see, there was this recipe in the November Bon Appetit for a cauliflower, raisin, caper, and bread crumb vegetable dish. It was even vegan! And the recipe was amazing, I used up a bit of bread crumbs which weren't as coarsely chopped and probably therefore weren't as crunchy. But it was still very good. I'll for sure make it again, with or without the capers.