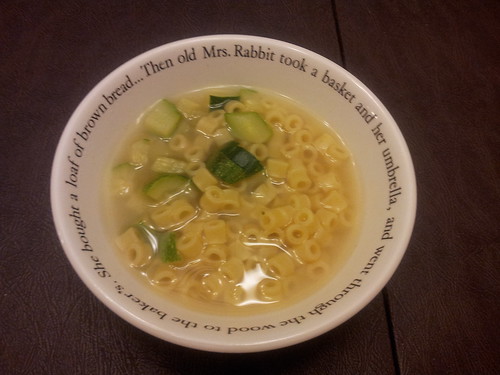 When zucchini is in such abundance, it's just so hard to not want to make yummy soups with it. This is a problem since my husband is against soup when it's so hot in Florida. (It was over 70 today.) For this I really can't blame him. So, in those cases I make less broth or serve myself more broth and give Paul less. Then, my bowl is labeled soup and his is labeled stew. Rarely do I get away with that switch, though. It was easy when I could remind him I was pregnant. Then he accepts that this is what's for dinner. How did I get such a wonderful guy?

This one takes three ingredients with the option to expand the number as desired. I actually do recommend a touch of grated Parmesan or Pecorino cheese to go on top. Orzo would be a nice, rice-y, alternative to the pasta, too. One thing that makes this recipe different is that the soup is served in the pasta cooking water, which is starchy. I like this slightly heavier flavor. But if you have pasta that was already cooked and drained, feel free to use it and have a clearer broth.

Bring broth to a boil. Add zucchini and pasta. Cook according to pasta package directions. For crunchier zucchini, add it about 5 minutes before the pasta is done. Serve immediately.

Changes/Additions/Alternatives: As mentioned above, the cheese is great. Feel free to mix up the veggies. I've also made this with a base of blitzed onion and celery added to the broth. It adds great flavor and extra fiber.