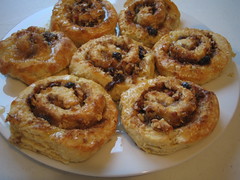 I suppose in my writing I have neglected to point out that my mother taught me how to cook. She helped me get my cooking honor in Pathfinders and still watches over me in the kitchen. This is one of my favorite recipes of hers.

When I was very young, we made biscuits from scratch. As I got older, we used Pillsbury Grands cause they were faster. Either is acceptable. If we used the Grands, we would just fold and mold the individual biscuits together and roll the dough out on a sheet. The size would be a good bit longer than wider. The longer, the more swirls in the roll. We used margarine or softened butter and spread it over the entire dough with a serrated knife. The serrated knife keeps it healthier because the butter isn't as thick. I always got the privilege of sprinkling the cinnamon over the butter and rubbing it in. As I got older, I learned the healthiness of cinnamon and no longer spare the shaker nor spread the cinnamon into the butter. I then sprinkled brown sugar end-to-end over the flat space of dough and my mother would roll the dough toward her creating a fascinating swirl. I loved watching the colors play. Again, as I got older, I felt the need to be a bit healthier by adding chopped pecans and raisins. The smaller the pecan pieces, the less likely they are to burn or to fall out of the roll. The pastries were cut into even 1 1/2 inch rolls, and baked on a sheet just like biscuits. Meanwhile, we would pour just a tablespoon of orange juice into a bowl and rapidly stir in powdered sugar until the juice became a thick and white icing. I learned as I have experimented at home if I limit the sugar, the icing becomes a glaze and the orange juice stands out more.

Those were some very memorable Sunday mornings. I love you, Mom.

These look massively good. Gonna have to make me about 3x that many.

They keep well for a week in air-tight storage. They warm in just a few seconds in the microwave. My sister-in-law cut one in half and put it in the toaster. This info is just in case you don't want to eat them all at once.